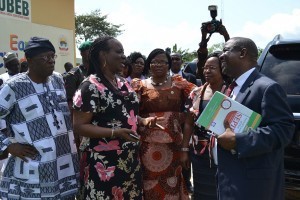 The Early Childhood Care Development Mega Centre built by Ekiti State government for babies of civil servants at the State Secretariat Complex in Ado-Ekiti, got commendation from the World Bank yesterday.

According to the World Bank, the facility will ensure the smooth transition of toddlers from cradle to the primary school.

The commendation came through Dr. Tunde Adekola, an education specialist from the World Bank, who visited the centre in the company of the Chairman of the State Universal Basic Education Board (SUBEB) Chairman, Prof Modupe Adelabu, who doubles as the Deputy Governor.

Expressing satisfaction with the state-of-the-art kits at the facility, the World Bank official has proved itself as the pacesetter and the state to beat in the provision of qualitative education in the country, adding that the state has raised the bar of early childhood education development.

Dr. Adekola, who was in Ekiti to represent the World Bank Country Director, Mrs. Marie Francoise Marie-Nelly at the inauguration of the Ekiti State Education Programme Investment Project (SEPIP), was taken round the mega centre by the SUBEB chair.

The Country Director’s representative expressed delight at the edifice, the environment, the supplies and amenities at the centre noted that they are all of international standard and could hardly be found even in celebrated private schools in Nigeria.

Lauding Governor Kayode Fayemi for being able to translate ideas into action and for his commitment to improving the education standard in his domain, Adekola said he was not really surprised at the attainment of the state in the education sector because Fayemi has in his deputy a committed and passionate educationalist.

He said the Fayemi-led administration has proven itself to be a government that is committed to doing the extraordinary for the overall development of the state and that the World Bank will continue to offer support.