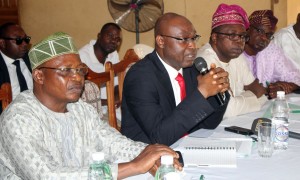 Ekiti State Government has earmarked a total sum of N3.3billion for water provision to all the communities in the State in the recently signed 2014 budget.

This is in consonance with the promise made by the State Governor, Dr Kayode Fayemi to the people during the town hall meetings held last November in the 132 communities in the State that government would expend a large percentage of the budget on water supply and meet the 80 percent  target set by his administration for this year.

Giving a breakdown analysis of the 2014 budget tagged “Budget of Stability and Economic Growth” in Ado Ekiti on Thursday, the State Commissioner for Budget , Economic Planning and Service Delivery, Mr. Biodun Oyebanji asserted  that there is need to ensure that water is made available across the nooks and crannies of the State hence the provision of the N3.3 Billion for Water Corporation for its capital expenditure in the year.

The Commissioner explained that out of the sum, N1billion is earmarked for the Ero Dam Water Supply project, N500,000,000 for the purchase of water treatment chemicals, N350,000,000 for Small Town Water Supply and Sanitation and World Bank Water project counterpart fund.

A sum of N150,000,000, according to the breakdown, is earmarked for completion of water projects and N180,000,000 for booster station while the Rural Water Sanitation and Hygiene will receive government’s attention in the sum of N50,000,000.

READ  There’s No Need For Bloodshed During Edo Elections – Obaseki

While assuring that government would continue its war against infrastructural deficit, Oyebanji stated that the performance of any government is largely measured by its success in the areas of water, electricity, housing and good roads “because they are the building blocks for economic development”.

He stressed that this explains why the Fayemi-led administration has placed high premium on infrastructural development across the State.

It is recalled that Fayemi had last December signed the 2014 Budget of N103.8 Billion which is to be sourced from statutory allocation, VAT, Excess crude proceeds, IGR, External Grants, MDG Conditional Grants, Reimbursement from the federal government on road projects, Bond, and ecological fund among others.

Speaking further, the Commissioner stated that the budget process was driven by the Medium Term Expenditure Framework (MTEF) as the estimates started with fiscal projections of revenues for 2014 through 2016 using macro-economic assumptions at 3 levels.

Meanwhile, a statesman and Ekiti leader, Chief Bandele Falegan has bemoaned the politicization of the disbursement of ecological fund to States.

The statesman commended the State Government for the various interventions that have been given to affected communities, stressing that but for the interventions, Ekiti would have been declared an ecologically distressed state.

READ  Obaseki Will Do Something Great In Edo State – Sen. Daisy Danjuma

The Only 3 in 1 Portal Offering Networking, Crowdfunding, Revenue-Share Projects...