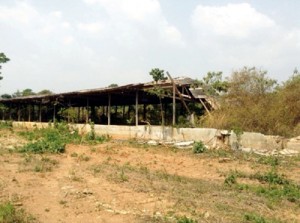 Ten years after it was initiated, the moribund Ekiti Integrated Poultry Project is generating yet another controversy, with Governor Kayode Fayemi declaring it dead. SINA FADARE visited the site of the project to find out why.

The last, definitely has not been heard about the controversial N1.4 billion Ekiti Integrated Poultry Project initiated in 2004 by former governor of Ekiti State, Ayodele Fayose.

That the project initiated with fanfare by the Peoples Democratic Party (PDP) administration in the state that time is now moribund is no surprise, but what is surprising is the declaration by the incumbent governor, Dr Kayode Fayemi that the project is beyond resuscitation.

Governor Fayemi had last week raised the dust on the controversial project during a visit to the project site when he said that it was designed to fail from the outset and that his administration cannot revive it the way it has done with other moribund projects established by previous administrations in the state.

“It was not designed as a viable project,” he declared bluntly to the surprise of some in the agrarian state.

Expectedly, Fayose did not like this statement and he fired back quickly telling Fayemi he has no right to make such a statement because the case was still pending in court, adding that the project was not designed to fail.

But a fact finding visit to the project site in the state by The Nation and interviews with some stakeholders revealed that indeed the poultry project may never see the light of the day in spite of the huge amount of public funds already expended.

Aside from the headquarters of the proposed project at Afao-Ekiti, the home town of former Governor Fayose, all the other project sites are full of either collapsed building or dilapidated ones. Most of them were in a sorry state depicting a lost dream. Even at Afao, the few buildings in the compound that could have housed the feed mill and the processing plant have been encircled by thick bush and are now home for snakes, squirrel and rodents.

Speaking to The Nation why the poultry project did not see the light of the day, the former Deputy-Governor to Fayose, Chief Abiodun Aluko explained that the project was to take place in four centers as a test run before accommodating other local governments at a cost of N400 million.

Aluko regretted that Fayose failed to listen to the voice of wisdom on the failed project when it mattered most. “He jacked up the cost of production from N400 million to N1.4 billion on a project which was supposed to be financed by a private company. That was why the project did not see the light of the day”.

READ  We Can Overcome The Coronavirus Pandemic – Dangote

Aluko said that he was humiliated by Fayose when he cautioned him that the Kangaroo method he was using on the poultry project will one day backfire.

“Yes, as the Deputy-Governor, l raised some observations about the sudden jack up and the future implication when we might have gone, but the governor shouted me down that l have no right to question his authority.

“It was against this backdrop that he bribed some members of the House of Assembly to impeach me, but thank God l was vindicated. The EFCC had dragged him to court on the issue. Again the same State Assembly has reversed its decision and said l was not impeached. The Court of Appeal in Ilorin also quashed the decision of the then Ekiti State House of Assembly as null and void. That is why today, l am enjoining my gratuity every month as the former Deputy-Governor of the state.”

Recently, while giving evidence at the ongoing trial of his former boss at the Federal High Court, sitting in Ado-Ekiti, Aluko said the Fayose administration hijacked the project from the contractor, Biological Concepts Nig. Ltd.

According to him, “each of the 16 local government areas was made to contribute N25 million, totaling N400 million, and the state also made a contribution. All the payments were made to Biological Concepts Nig. Ltd. I left office soon after and do not know what happened later”.

The former Deputy-Governor, who exonerated himself said, Fayose did not allow the contract to pass through the State Tenders Board, which he (Aluko) was chairman by virtue of his office as Deputy-Governor.

”I was not party to the award of the contract and by virtue of my office, as chairman of the State Tenders Board, I should have been. There was also no bidding on it. Each of the 16 local governments paid N25 million, totaling N400 million, which was given to Biological Concepts Nig. Ltd,” he explained.

However, speaking with The Nation the Ekiti State Commissioner for Agriculture, Mr. Jide Arowosafe who insisted that the moribund poultry project by Fayose did not have a sustainable plan, said there was no equipment in the processing plant.

Arowosafe said that majority of the people would appreciate the Fayemi administration for making such a statement of fact if they had visited the site of the project, adding that, “if you are not a technical person, you may not be able to appreciate what the governor was saying. Take for instance, the one in Afao that supposed to be the headquarters of the project, many investors have gone to look at it, but find it not viable and not the right structure for such a project”.

Arowosafe explained that the composition of the structure of the project was faulty from the outset. “For example, you have a processing plant and you have a feed mill beside it. Normall, you cannot have a feed mill where you are processing broilers in the same compound and environment. The closeness is not only unhealthy but unprofessional. You can see that those structures are not right. That alone was a failure from the start. Even NAFDAC will not give you a license to operate a processing plant in the same compound with a feed mill. It is not done anywhere. Therefore technically there was a hitch”.

The commissioner faulted the non involvement of agencies like the National Agency for Food and Drug Administration and Control (NAFDAC) at the beginning which could have ensured that things were done properly. “If you have a big structure like that to process, the first step is to bring NAFDAC in to come and sanctify it as a worthy project before you embark on production. Since it was not sanctified, it will never work.”

He also faulted the siting of production pens scattered all over the 16 local government areas with the hope to feed the processing unit at Afao, “that is another technical failure that was not put into cognition when the project was embarked upon. You cannot bring broiler from Ikole or Omuo-Ekiti to be processed in Afao. It is beyond the normal travelling distance to where the processing plant is located. These are some of the technical flops that the governor summed up to arrive at a conclusion that the project was designed not to be sustainable from the outset.

“Another area was the thickness of the production pen, you saw it yourself and it was below standard anywhere in the world for such a project. It was just like a paper in terms of thickness, you do not do such a thing for a production pen. If what you see was still solid, like the one that was housing our farmers in Ikere which was constructed by the Benin-Owena River Basin Authority many years before that of Fayose, you will appreciate the concern of the governor,” he explained.

The commissioner emphasised that the government was serious about agriculture and not paying lip service to it. “The Fayose farms are not revivable. You can attest to the quality of the building at the Benin-Owena poultry farm that we have revived. We spent less than N50 million to revive those huge poultry units on the Ikere-Ise road”.

However, speaking to The Nation on condition of anonymity, one of those who worked briefly in the Fayose farm disclosed that Fayemi was right to tag the project as a no go area in terms of revival.

According to him, “those days was like a bazaar when millions of naira were withdrawn from the poultry project fund with impunity by  the governor himself, therefore one needed not to consult a seer then to know that the project would not see the light of the day. When l saw all what was happening, l had to resign because l know that the day of reckoning was at hand”.

He explained that all efforts by the professionals on the ground to tell the contractor that things should be done properly were rejected. “The poultry project was a good initiative, but the governor lacked the intellectual capacity and politically arrogant to listen to some few voices of reason which could have saved him from his present predicament, that was why the project failed at inception.

“If the current governor can produce about 27,000 birds with less than N20 millions and a standard processing plant, you can guess what the economy of Ekiti  would have been  by now with about N1.4 billion allegedly spent on the failed poultry project by Fayose’s government if well managed,” he lamented.

Lamenting the situation, the former Chairman of Ado-Ekiti local government during Fayose’s regime, Mr. Taye Fasuba, who fought the former governor to a standstill over the deduction of N25 million from the council account under the State-Local Government Joint Account System for the moribund poultry project told The Nation that he has no regret fighting the former governor despite series of attempt to his life by political assassins

Fasuba pointed out that despite the fact that he was a lone voice then, he still believes in the autonomy of local government because it is through such a policy that progress can get to the grassroots.” I am now vindicated and if l have my way again, l will do the same.”

This article was first published in The Nation

Nigerians wanted A Change, So Buhari Must Offer That Change, Says...

Kompany’s Injury Not The Reason For Our Slip Up –...

Yemi Osinbajo Is An Ambassador For The Christian Community – PFN