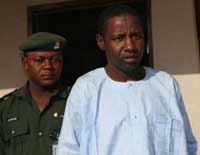 Justice Fatu Riman of the Federal High Court Kano, today January 29, 2014, convicted and sentenced one Abdulkadir Mohammed to nine years imprisonment with an option of N1, 200,000 (One Million Two Hundred Thousand Naira Only) fine for offences bordering on conspiracy and forgery.

The convict was arraigned by the Economic and Financial Crimes Commission (EFCC) on a 3-count charge for attempting to defraud a retired army General, Garba Ali of N14, 000, 000 (Fourteen million Naira in a land deal.
The accused pleaded guilty to all the three counts and was immediately convicted by Justice Riman.

On counts one and three, Abdulkadir is to serve two years imprisonment each but with an option of N350,000 (Three Hundred and Fifty Thousand Naira Only) fine while he is to serve five years imprisonment with an option of N500,000 (Five Hundred Thousand Naira) fine on count two. The sentences are to run concurrently.
Abdulkadir, a 40 year old resident of Kano is alleged to have deceived one Major General Garba Ali (Retd) under false pretence to deliver the title documents of his property to him by issuing two Fidelity Bank cheques in the sum of N14, 000, 000 (Fourteen Million Naira Only) to the General which on presentation to the bank were dishonoured as they were discovered to be forged.

Dillish Admits She Has A Crush On Flavour