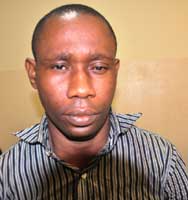 The Economic and Financial Crimes Commission, EFCC today, February 13, 2014 arraigned Anthony Ezechukwu,  a 34 year-old graduate of International Relations and Management before Justice E.S Chukwu of the Federal High Court, Abuja on a 4-count charge bordering on fraud and personation.

Count two of the charge reads: “that you, Anthony Ezechukwu on or about 28th day of November, 2013 at Abuja within the jurisdiction of this Honourable Court, with intent to defraud, opened a false online facebook account to wit: url:https:/ / www.facebook.com/agis.jamilahtangaza.9 in the name of one Jamilah Tangaza, the Executive Director, Abuja Geographical Information System, containing false pretence purporting that you have been appointed by the FCT Minister, Senator Bala Mohammed to take control of all lands and houses sale in the FCT and attempted to obtain money from the general public, thereby committing an offence contrary to section 8(b) of the Advance Fee Fraud and Other Related Offences Act, 2006 and punishable under section 1(3) of the same Act.”

The accused pleaded not guilty when the charge was read to him. Upon his plea, counsel to EFCC Abdallah Faruk prayed the court to fix a date for trial.

Justice Chukwu adjourned the case to February 27, 2014 while ordering that the accused person be remanded in prison custody.

We Are Making Our Own Stars At Tottenham – Mauricio Pochettino

How Iran's Gadget Bloggers Became Victims of the Revolutionary Guard

Nigeria Is Not A Jungle – Nyesom Wike