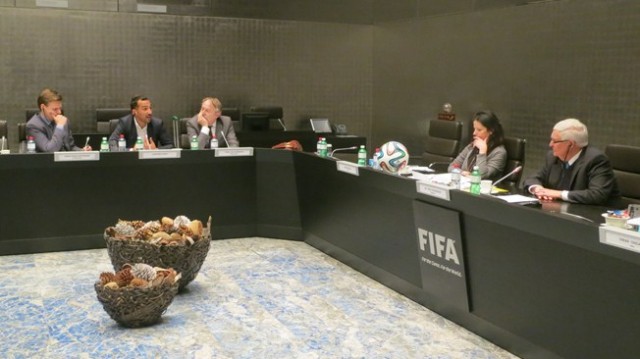 The exchange came as part of a series of meetings initiated by FIFA with football stakeholders as well as other entities including human rights and labour organisations, and trade unions. These meetings are being led by FIFA Executive Committee member Dr Theo Zwanziger, mandated by the FIFA President to oversee these matters.

FIFA President Blatter opened the meeting by giving a warm welcome to the participants. President Blatter emphasised the importance of consulting all stakeholders, as well as learning from the experiences of Zahir Belounis, to gain a further understanding of the issues, and to make progress on developing feasible solutions, in a spirit of cooperation.

Although FIFA has been limited in its ability to get involved in Belounis’ specific case, Dr Theo Zwanziger re-confirmed FIFA’s commitment to work with all of its members and stakeholders in relation to the rights of players in similar situations where possible.

Dr Theo Zwanziger continued by explaining that the outcomes of the various meetings would be collated into a report to be presented to the upcoming FIFA Executive Committee meeting on 20-21 March, outlining possible initiatives that FIFA could take on these issues.

“As the organiser of the FIFA World Cup, FIFA acknowledges its responsibility to look into human rights issues in the host countries of its flagship event,” said Dr Zwanziger. “We will continue to look into this matter and work with all stakeholders so that feasible and sustainable solutions are found. The next step, after important meetings such as this one today, will be submitting a report to the FIFA Executive Committee.”

“As FIFPro, we are open to continuing the dialogue, as the cooperation with FIFA will hopefully contribute to preventing similar situations from occurring in the future.”

Photo: Ghanaian Songstress Causes Controversy As She Reveals All Her Assets...

James Rodriguez To Play Against England?