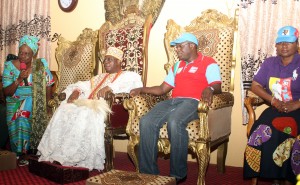 The people of Ado-Ekiti have declared that APC gubernatorial candidate and incumbent Governor of Ekiti State, Dr. Kayode Fayemi, is their sole candidate in the June 21  governorship election in the state.

The people made the declaration during the Governor’s visit to the palace of Ewi, Oba Rufus Adejugbe on Friday, in company with his wife, Erelu Bisi Fayemi, the deputy Governor, Prof Modupe Adelabu and the Senator representing Ekiti Central, Babafemi Ojudu.

Describing his performance as unrivalled in the history of the town and the state, they said if it was not for the constitution, they would have supported him for more than two terms in office as he has brought dexterity, honesty and credibility to governance.

Speaking on behalf of Ado-Ekiti people during Governor Fayemi’s visit to the palace on Friday, the Odogun of Ado-Ekiti, Chief Oba Aladetoyinbo, who is traditionally the second-in-command to the monarch of the town, praised the governor for fulfilling his campaign promises to Ado people.

“The people of Ado-Ekiti have seen your good works. We cannot quantify them because they are unrivalled. You made it possible for Ado-Ekiti to profit from this government. In like manner, you will profit from Ado people’s votes.”

He commended the governor for the roads constructed in the town, the street lights, the Oba Adejugbe General Hospital which is almost completed, amongst other projects.

“Your Excellency, you are the only one that we support. You can be sure, sir, Ado-Ekiti will not betray you. Your commitment to the development of not just Ado-Ekiti, but the whole of Ekiti will be rewarded. The reason the prayers offered by Ado community are speedily answered is our honesty. We don’t double-deal. Your Excellency can be sure of our total and unmitigated support.”

READ  APC Can Think All They Want About Me And Hushpuppi, I Won’t Respond – Dino Melaye

Chief Aladetoyinbo said in spite of the governor’s excellent performance in the town, development is never static, hence the continuous clamour by the people for more dividends of good governance which the Fayemi administration has been doling out in the last three and a half years.

He urged the Governor for the completion of the I32KVA substation road at Omisanjana, construction of Sije/Ajebandele road and Igirigiri road. He added that the people of Odo-Ado also want street lights in their domain just as the other quarters of the town.  Ado-Ekiti consists of Oke-Ewi, Odo-Ado and Oke-Ila.

Other requests put before the governor are the completion of the amphitheater in the palace and creation of more local council areas.
Lending his voice, the Ewi of Ado-Ekiti, Oba Rufus Adejugbe, said the visit of the governor was not about election, adding that such visits should be regular so that it would serve as an avenue for the governor to interface with the people from time to time.

Oba Adejugbe commended the governor for being outstanding in the delivery of dividends of democracy and particularly gave him a pass mark for his commitment to the developmental turn-around of Ado-Ekiti.
“We have seen the truth. We have seen your honesty. We testify to your performance. We are so happy. God will stand by you. We pray for you with all our heart that God will grant you success in the coming election. If a public office holder is doing well and there is peace, what we should all do is support such a person to continue with the good works.

“Initially, when he said he had an 8-point agenda, I said these politicians have come with their lies again. I said those with 1-point agenda has not delivered, this person is talking about 8-point. We thank God because you have delivered on all the 8 points. As you did in Ado, so you have done in all towns, particularly the 5 kilometre Local Government roads. That is the hallmark of this government.”

“Lack of good roads was our major problem in Ekiti State. With good roads, workers can afford to stay in their different towns and come to their place of work in Ado-Ekiti every day. Construction of roads is the hallmark of the Fayemi administration and that is why the governor can confidently say he has done well, and indeed he has done well in all sectors.”

He said Ado-Ekiti would have been like a glorified Local Government headquarters if not for the sincere commitment of the governor to the development of the town.

Oba Adejugbe, who noted that Ekiti is one, advised politicians to refrain from violence as the governorship election draws near, adding that God abhors disorderliness.

Addressing the kabiyesi and the Ewi-in-council, Governor Fayemi explained that he was in the palace to avail the people of Ado-Ekiti of his development strides, adding that the chiefs are better placed to reach out to people in their various quarters.

Fayemi, who noted that Ado-Ekiti had always supported him, even outside of office, said every unbiased person would agree that the face of the town has changed for the better.

“In one or two months from now, we will commission the Oba Adejugbe General Hospital at Agric Olope. We will also commission the 10, 000-seater state pavilion next month.”

The governor promised that his administration will construct a fly-over bridge at Fajuyi.

“Our people in Ado-Ekiti know what is good for the town and they know my administration has done well. There may be one or two things we have not touched, we will do them.”

He explained that the 132KVA road project was not terminated, but that the contract was revoked owing to the bad attitude of the contractor.He promised that work would soon commence on the road and the Igirigiri road.

Responding to the request on LCDA creation, Fayemi said the committee set up to look into it will soon submit their recommendations.

According to him, “I know the creation of more local councils is very important to Kabiyesi and our people in Ado-Ekiti. I am happy that it is being proposed at the ongoing national conference that states should not have to defer to Abuja for the creation of local governments,” the governor said.

Fayemi, who said his government has imparted all communities in the state positively, added that there is no community where his administration has not executed at least five projects.

He urged the Ekiti people not be scared as they will always be adequately protected.

“I don’t want us to be scared. Part of what we discussed at the national security meeting on Thursday was that politicians should mind their utterances. I hear some people are already saying Ado has the highest number of votes and that they will cause trouble if it does not go their way, I assure you, that will not happen. It will not happen anywhere in Ekiti State.”