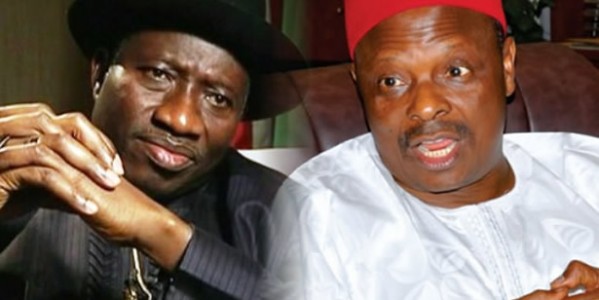 Kano State Governor, Engr. Rabi’u Musa Kwankwaso has dismissed as baseless and imaginary, the allegation by President Goodluck Jonathan that the state government cannot account for the money received from the Federation Account, insisting all funds collected by the state government was judiciously spent as every single expenditure was properly recorded.

He stated this while meeting with All Progressives Congress, APC, stakeholders at Government House on Friday, pointing out that President Jonathan was only trying to judge everybody by his own standard.

Gov. Kwankwaso’s reaction is coming almost two weeks after the president made the claim at a Peoples Democratic Party, PDP, rally in the state to officially receive ex-governor Ibrahim Shekarau to the party.

The governor maintained that people of the state are satisfied with the way the money is being spent on life-changing projects that will stand the test of time, adding that the projects embarked upon by the government are genuine, extensive and verifiable.

Affirming that Kano under his leadership would not tolerate stealing of public funds, Kwankwaso said he has been looking for people who steal government’s money to punish and set example as his government has not and will never tolerate or encourage corruption.

“I challenge anyone, including the President, if he finds anybody who siphoned local or state government’s money to report to me and see what action my administration would take against the offender”, the governor said, noting that as the governor of Kano state, he is not under the President, but under the people of the state, who voted him into office, therefore, in his words, “they are the ones that have the right to query me not President Goodluck, who is known to punish whistleblowers like our respected son, Sanusi Lamido Sanusi”.

Kwankwaso, who berated the PDP for organizing what he called a jamboree in the name of unity rally in the state recently, noted that the gathering was not attended by people from the state but outsiders, adding that even its so-called stakeholders shunned the venue.

“These new associates of the President in Kano are not credible people, and do not have any supporters, therefore, they would only contribute to his failure and pave way for APC to win the 2015 general elections”, Kwankwaso stressed.

The governor then expressed satisfaction with the just concluded ward and local government elections of the APC in Kano describing it “as a step towards capturing the 44 local government areas of the state in the forthcoming elections”.

He told promoters of APC candidates to support them in good faith as the present administration would not tolerate corruption under the guise of sharing of monthly grants or in whatever form in the councils as was the case in previous administrations.

Speaking earlier, the state APC interim chairman, Engr. Abdullahi Tijjani Muhammad Gwarzo, who is also a former deputy governor of the state, announced that the APC’s wards and local government elections were conducted in peaceful manner.

In their respective remarks, Senator Kabiru Ibrahim Gaya, who last week declared his intention to contest the 2015 governorship polls in the state, and Deputy Minority Leader in the House of Representatives, Hon. Kawu Sumaila, pleaded with party members to embrace unity as the only option for the rapid progress of the party in the state and the nation as a whole.

I Am Sick Of Mourinho’s Moaning – Scholes

Your Mind Completely Devours Everything On Social Media – AKA