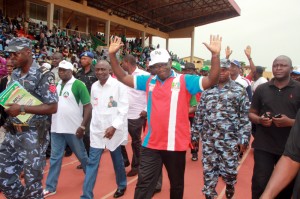 Ekiti State Governor, Dr Kayode Fayemi has challenged all candidates in the forthcoming election to declare their assets and stop peddling lies that he owns a university somewhere.

The Governor who made the challenge in Ado Ekiti at the 2014 May Day celebration said rather than spread rumours which are baseless, the opponents should come out and publicly declare their assets before Ekiti people like he voluntarily did when he became governor.

Dr Fayemi who stressed that he has not added anything to the assets he declared when he became governor urged anyone who thinks he has more than what he had declared to come out and present evidence.

He added that those who are computer literate can only visit the internet to search information about him owning anything outside the declared asset.

“Let me call on our political leaders to shy away from politics of destruction, politics of brutality, and politics of lies because it will not get anybody anywhere. When you hear silly stories about your governor owning a university somewhere, the single question that any intelligent person should ask is provide me evidence that is independently verifiable about this university; Who owns it and where it is located.

I am the first governor in this state who declared his assets publicly. No other governor in this state has ever voluntarily declared it. If you go to the internet, those who are on the internet, google the assets of Kayode Fayemi and his wife, what I own before I became governor I have not added one thing to it and I challenge and dare anybody to come out and bring information to Ekiti people that I own anything including a block that I have added to my house either at Isan or Ibadan or anywhere else that I have house in the world”, he said.

While urging Ekiti workers to help moderate the tendencies of “some elements in the political class who mark their lack of popularity by creating dissension and violence in the society during the electioneering”, the Governor preached against political violence, saying that the ambition of any politician is not worth the shedding of blood of any citizens.

On the alleged non payment of pension, Fayemi said his government does not owe any pension but the purported debt is the arrears of pension owed the pensioner covering a period of 10 years, adding that it is not possible for government to clear the backlog of debt at once.

He however assured that the government will not shirk in the prompt payment of monthly salary of the pensioners even as he added that the arrears of the backlog will be cleared gradually as State finances improve.

The Governor added that his government has cleared the backlog of overdue promotions covering 2012 and 2013 and has directed that necessary machinery be put in place for the commencement of 2014 processes.

Earlier in their speeches, the Chairmen of the Nigerian Labour Congress and Trade Union Congress, Mr Ayodeji Aluko and Mr Kolawole Olaiya respectively commended Fayemi for prioritising the welfare of the workers, saying that the present administration has increased salaries about three times within three years.

Olaiya called for a review of the Revenue Allocation formula saying that the upward review will enable States have enough funds for meaningful development and make the State work for the people.

PDP Will Not Change Its Name — Jerry Gana