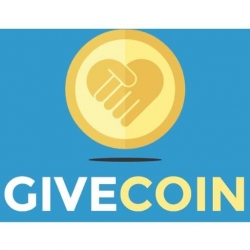 Philadelphia, PA, May 20, 2014 –(PR.com)– Givecoin, the first altcoin aimed at crowdfunding charitable organizations with the efficiency and accountability of cryptocurrency technology, is excited to initiate it’s recent partnership with doabitofgood.com with a donation of 200,000 GIVE. These will be distributed in 100 GIVE increments to the wallets of new users to donate to non-profit organizations that are signed up within the system, which is also compatible with Bitcoin and various other altcoins.

Do a Bit of Good’s patent-pending technology, a personal screensaver that both mines and donates coins while active, in executive director David Duccini’s words “puts crowdfunding on autopilot”. The system is one of the first in a wave of new technologies that ‘sit on top of’ the Bitcoin protocol: tapping into new applications and uses of cryptocurrency while making it as user friendly as possible.

“We first conceived the idea for Givecoin while discussing the recent flood of new altcoins in the cryptocurrency market—literally dozens popping up per day, but very few that were more than clones of each other branded with a new name,” said Givecoin’s co-founder Mike Paszkiewicz. “This led us to consider ways in which we could use the attributes of cryptocurrency to do something both unique and beneficial for charities worldwide.”

Advantages over traditional methods of giving include the ability to send micro-donations, fees several magnitudes less costly than credit/debit and wiring, and psuedoanonymity: dollar for dollar organizations receive every ‘bit’ of the contribution to their bottom line. Givecoin also implements the power efficient “X11” hashing suite.

“When we were contacted by doabitofgood.com’s Executive Director David Duccini, I was amazed at the ingenuity and simplicity of his platform. Our goal seemed one and the same: to show average people and businesses that crypto technology is nothing to be apprehensive about…that in fact it can be used to ‘do a bit of good’ for those in need and improve the bottom line for every non-profit willing to take a few simple steps.”

Lead developer Dan Korczak commented, “…the same skeptical sentiment existed in the early days of the internet: the average person was wary of the technology because it was clunky, confusing, and lacked user friendliness and support. The internet in fact still runs on the same TCP/IP protocol from those days, but the average web surfer knows nothing of it because interfaces and applications have been developed over the years to provide an effortless and seamless experience.”

Do A Bit of Good gives hope toward a steady mainstream adoption of Bitcoin, Givecoin, and other coins as property, financial instruments, and a means of charitable giving. “Six months ago I wouldn’t have chalked my grandmother up as a cryptocurrency miner, but with their platform the day has arrived where she could set up the screen saver program and start donating herself,” said Paszkiewicz.

In addition to the recent partnership between the two, the Givecoin Foundation is currently donating ‘early adopter bounties’ to the first 20 charities who reach out interested in accepting Givecoin. Interested non-profit and charitable organizations can submit a form at givecoin.info.

All media inquiries and interested organizations can be addressed through: givecoinfoundation@gmail.com

College Kids Not Only Break the Bank but Also Break Their...

Celibacy In My Relationship Is Not Easy – Ciara