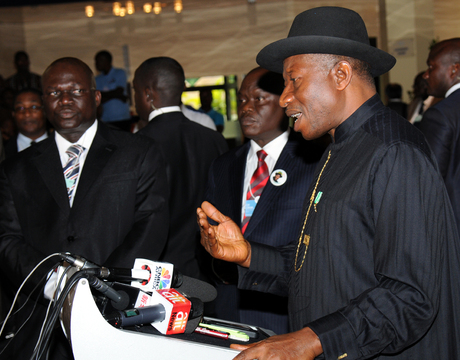 President GOOLUCK JONATHAN, ADDRESSING JOURNALISTS AFTER THE WORLD ECONOMIC FORUM ON AFRICA IN ABUJA ON FRIDAY (9/5/14).

President Goodluck Jonathan has condoled with the FCT Minister, Sen. Bala Mohammed, over the death of his mother, Hajiya Aishatu Mohammed, describing it as an irreparable loss.

Jonathan stated this in Bauchi State on Saturday during his condolence visit to the minister’s family.

Represented by the Vice-President, Alhaji Namadi Sambo, the president said death was a final destination of mankind.

“Aishatu had lived a fulfilled life; it was her time to go and God took her away.

“May the Almighty Allah forgive and grant her eternal rest.

“I also pray to Allah to give you the strength to bear the loss”, he said.

Responding, the minister’s elder brother and the District Head of Duguri, Alhaji Adamu Mohammed, thanked Jonathan and his entourage for the condolence visit.

He said this has demonstrated the people-oriented leadership style of the Jonathan-led administration.

“This is a demonstration of the love, unity and the spirit of togetherness needed to build a strong and united Nigeria”, he said.

The News Agency of Nigeria reports that those on the entourage were the Minister of State for Works, Alhaji Bashir Yuguda; the Minister for Women Affairs, Hajiya Zainab Maina; the former Secretary to the Government of the Federation, Alhaji Yayale Ahmed, among others.

NAN recalls that the minister’s mother, who died on May 7, after a protracted illness, has since been buried according to Islamic rites.

Obahiagbon Reacts To Withdrawal Of Tambuwal’s Security Details, What Is He...