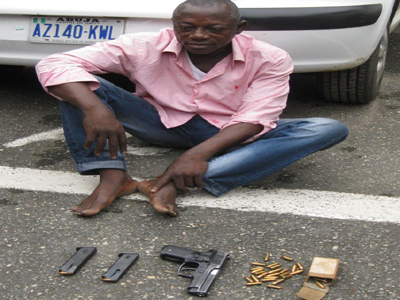 One AK 47 rifle, one 9mm pistol, five Automatic Pump Action rifles and assorted ammunition were recovered from the suspect.

Lamidi, who alleged that he was being set-up for belonging to the Peoples Democratic Party, PDP, claimed he bought the weapons from one Abdulazeez Amao to protect himself.

He said: “I bought the AK 47 for N350, 000 and the pistol, N350, 000. I bought them to protect myself because there was a time assassins were after me. I do not rob with them. I know where this victimisation is coming from.

“The All Progressives Congress (APC) wants to rope me because I am in the Peoples Democratic Party (PDP). They asked me to join them and because I refused, they decided to put me in trouble. I am a strong member of the PDP and I do not regret it”.

Speaking at the parade of the suspect, the Lagos Police Commissioner, Umar Manko said “Sequel to the arrest of a notorious illegal arms dealer, Abdulazeez Amao, who smuggled AK 47 rifles from Mali and Burkina Faso to Nigeria on March 10, and the recovery of 10 AK 47 rifles, Amao confessed that Alhaji Mukaila Lamidi, the former chairman of the Oyo State NURTW, bought one AK47 rifle and one English pistol from him.

“Consequently, I directed the officer in charge of the Special Anti-Robbery Squad (SARS), Abba Kyari, to go after Lamidi. Two SARS Lagos decoy teams were briefed and deployed to Oyo State with extensive GSM data obtained from Lamidi’s phone number. After three days of diligent follow up, Lamidi was arrested at Olodo in Ibadan on May 10 at about 2:30am while driving in his ash colour Nissan Quest space bus.

“He confessed to have given his AK 47 rifle to one Tirimisiyu Olowoposi in Ibadan. Efforts to arrest Timirisiyu proved abortive as he is already aware of Lamidi’s arrest. Kyari and his men are working to arrest him soonest”, Manko said. 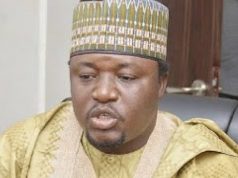 Sony Plans on Selling Its PC Business to Focus on Smartphones

Opening BUILD Africa a Forum to End the Infrastructure Gap in...

Pep Immerse Himself In Man City’s Successes And Failures