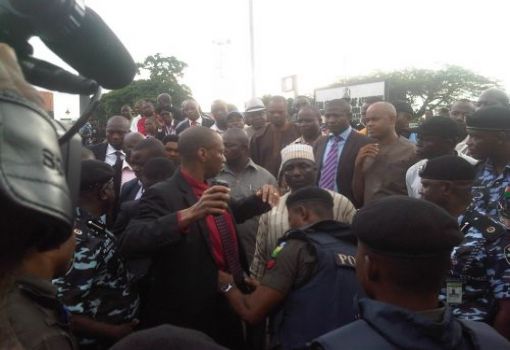 Edo HOUSE OF Assembly SPEAKER, UYI IGBE, BEING FRISKED BEFORE ENTRY INTO THE COMPLEX

All Progressives Congress (APC) legislators in Edo House of Assembly have accused the Inspector-General of Police (IG), Muhammed Abubakar, of aiding the four suspended lawmakers in the house to perpetuate illegality.

Mr Kabiru Adjoto, the Chairman, Committee on Information, who spoke on behalf of the legislators, said this on Wednesday in Benin while addressing newsmen outside the assembly complex.

The assembly had been in crisis since June 9, following the suspension of four lawmakers, including the Deputy Speaker, Festus Ebea (APC Esan North-East).

The three others are from the PDP.

The four legislators were suspended following their alleged refusal to obey court order restraining them from participating in legislative activities.

Adjoto alleged that the IG and the state commissioner of police had given protection to the suspended lawmakers to hold parallel sittings.

“We are aware that the IG brought a special squad from Abuja to give cover to the suspended lawmakers.

“The IG should desist from taking orders from politicians because they are Nigeria Police”. he said.

However, the Commissioner, Mr Foluso Adebanjo, debunked the allegation.

He said: “If you look at all the police vans and the policemen here today, they are all from Edo State.

“Our duty here is to ensure that there is no breakdown of law and order”. (NAN)

New HUBER+SUHNER products at InnoTrans 2014 are set to enable Gigabit...

We’ve Not Banned Ex-Ministers, Others From Traveling Abroad, Says Buhari