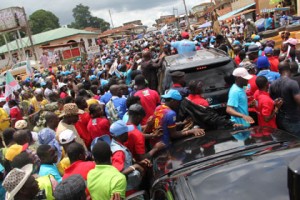 Agba o si ni ilu, ilu baje, bale le ku, ile da horo. Imado iba se bi elede a balu je, eru iba joba eeyan o bakukan.” These are two Yoruba proverbs that capture my feeling about the Ekiti forthcoming election. If there are no elders in Ekiti to speak the truth, our state will become a deserted state without a future. If we allow brutes to take over our government, then we cannot expect progress.If a slave becomes king, no free born person would remain.

The Yoruba people are a culturally wise people and this is why we have gotten this far in our life’s journey. But at the right time in this journey, we have had to fall back on the wisdom of our ancestors as encapsulated in our proverbs and witticisms. As an academic, I have always had the problem on relating to the Nigerian political environment. In fact I always say that my western education has not prepared me well for the hustle and bustle of the Nigerian political environment.

I have always had problems adjusting to understanding the nature of our politics. Yet I have practically lived my adolescent life in an intense political environment. How on earth, in the year of our Lord 2014 can anybody compare Kayode Fayemi, our incumbent governor with Ayodele Fayose, our former governor who we are trying very hard to forget that he ever ruled our state?

How could a state whose citizens are tempered by education and the struggle against a harsh environment of the hilly topography of the Ekiti State find it acceptable to have a man who ran the state aground and down through bribery and corruption and who imposed himself on the generality of the people of the state including traditional rulers by brute force and coercion including roughing up people violently if necessary? How can he be running to rule the same state whose legislators impeached and removed him from office?
This bad dream and nightmare has again come to haunt our people even while we are awake and it seems some people are even giving it a consideration when in fact it should have been rejected outright. On the other hand, we have a good commodity to sell in Fayemi.
This is a man true to his conscience who for the past three and a half years has been tested and proven to be a round peg in a round hole and a governor who instead of shaming us has proved to be an object of pride to all Ekiti people at home and abroad. He is a sober man compared to a man acting like a drunken sailor while in office.

Supporters of Fayose describe him as onijagidi jagan, a roughneck who should never have been governor in the first place. If we are a sensible people, and I think we are, we should not be faced with this choice but the choice is clear. There is no meeting point between darkness and light, between peace and war, between serenity and confusion, between murder and life, between development and underdevelopment, between progress and backwardness and between education and illiteracy.

Fayemi is a vessel unto honour. He is not perfect, even our Lord Jesus Christ said no one is perfect. He has set his hands on the plough of Ekiti state’sprogress unless we pull him back, it is forward ever and backward never. As an elder, I cannot keep quiet and allow people to be misled, Fayose has no plan for Ekiti.

If he does, he will not be talking about bringing up two new universities when the only one we have is not well funded because the state is not well endowed materially and I speak from experience.

His people are going round telling lies in order to hoodwink our people but they will not succeed. One of them without shame told me that telling lies is what they call “political bomb” and that they are ready to use it against Fayemi. I challenge all Ekiti people in diaspora to send word home about this election. We will not allow uncircumcised people from outside to take our patrimony from us.
Those who are planning to use extra electoral strategy to rule Ekiti state will not succeed because we will not allow them. I will not be a slave to anybody no matter how highly placed he or she may be and my children and my grandchildren and all Ekiti youth now and in future will not be slaves to outsiders.

Our people should be allowed to make a choice and I believe they will make the right choice. Let the word go out that we Ekiti people are inheritors of an intrepid tradition of resistance and if need be, we will resist again, any imposition from outside. Threats have been issued about this election to be a do or die affair.

Huge amount of money will be brought to Ekiti during this time to buy the voters. My advice to my people is to take the money and vote according to your conscience. The development in Ekiti in the last three and a half years provide opportunity for comparison and this is why this election is a referendum on good governance which has been the experience of Ekiti people during the Fayemi administration. We have the opportunity to build on this excellent performance and to lay the solid foundation of an industrialised state enjoying the application of the knowledge of our people for economic development.

Peace is a desideratum for development. We have enjoyed this peace for over three years and we do not want to go back to Egypt. No country today can be developed without external support. The same scenario goes for our state. If we do not have a government headed appropriately by a far seeing person, we will not be able to attract economic development assistance because only the deep can speak to the deep. A governor who is known in and outside his state, who speaks the language of the world, a renaissance man and who is sought after by the haves and have-nots, by billionaires and plebeians for inspiration will be able to attract attention to our state for the economic upliftment of our people.

Education means a lot to our people because since independence it has provided means of upward social mobility. We need somebody who knows and appreciates the meaning of sound education.

You cannot give what you do not have. We grant Fayose kudos for lifting himself by his bootstrap but he should appreciate what God has done for him and not push his luck too far. He must not allow himself to be used by any external force for their own purpose. If Fayose loves Ekiti people, he himself will accept the fact there is a difference between knowledge and mere understanding, between wisdom and ignorance, between studentship and scholarship.

Ekiti is too important for experimentation, we do not need a repeat of a failed poultry experiment that gobbled up N2 billion which could have built us a bright new Ekiti University Teaching Hospital. Fayose as a patriot must tell Ekiti people the truth that he cannot beat Fayemi in a fair contestation of ideas.

If we do not monitor this election and allow evil to triumph over good, people will laugh last at us that we have so many PhDs but no sense and that we cannot even make a wise choice. We have to stand up and be counted. This is the time to speak out.
At a time like this, silence is not golden. We need to seize the moment and march forward in development under the governorship of Fayemi but if we allow our state to be robbed of progressive rulership, may God forbid, but if we do, let the last man leaving the state shut the door and switch off the light.

We Will Continue to Meet Our Salary Obligations