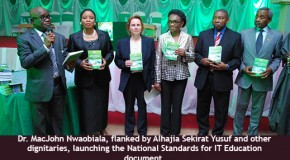 ABUJA (Education Ministry Report) – As part of the efforts to promote Information Technology (IT) Education in the country, the Federal Ministry of Education has launched the National Standards for IT Education document which sets clear standards for the teaching and learning of IT at all levels.

While launching the document on the occasion of the 2014 Information Technology (IT) Professionals Assembly held in Abuja on Thursday June 19, 2014, the Minister of Education, Ezenwo Nyesom Wike noted that ICT has changed the dynamics in the world of work and expanded social networking beyond borders as well as introduced new paradigms in education delivery and administration beyond the level ever envisaged.

He said that the theme of the assembly which was on “Harnessing the Potentials of IT Professionals for National Development” is timely and strategic as it aligns with the current drive by the Federal Government to integrate ICT into every sector of the economy, the education sector in particular.

The Minister, who was represented by the Permanent Secretary in the Ministry,  MacJohn Nwaobiala said that in the education sector, the Government believes that successful contributions to meeting the Vision 20:2020 are most likely to be made through the development and deployment of ICT in education. He added that this was the reason why the Government decided to establish some initiatives aimed at increasing access through distance learning to bring educational opportunities to the doorsteps of Nigerians of all ages.

“The Ministry has provided requisite ICT infrastructure including access to the internet to all schools under the Ministry’s purview as well as increased the number of ICT teachers at Federal Unity Colleges through the introduction of ICT conversion courses for science teachers. Notwithstanding the modest achievements made, there are the challenges of inadequacy of ICT infrastructure, including low bandwidth for internet access, among others,” he stated.

While stressing the pivotal role which ICT plays in attaining sustainable development and global competitiveness, the Minister called on the public and private sectors to work together towards addressing the challenges in ICT infrastructure development in the country.

In a welcome address delivered at the occasion, the Chairman of the Computer Registration Council of Nigeria, Sekinat Yusuf explained that the annual IT Professionals Assembly has come a long way. She intensified that the Assembly not only promotes the IT profession, but contributes significantly to the formulation of IT policies in the country. She also commended the efforts of government towards ensuring the deployment of IT in all the sectors of the economy, saying the body would continue to support government initiatives at promoting IT education.

Charles Novia Tells Us Why The Mavin All Stars ‘Dorobucci’ Music...