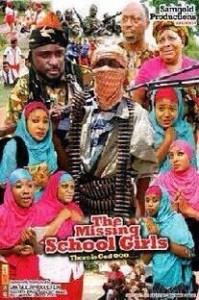 Remember I said this was coming very soon, and here it is.

The very obvious and predictable Nollywood producers have lived up to their unprofessional standards as they take advantage of any slight opportunity to make a quick buck.

Barely months after the ALUU4 were killed, Nollywood producers released a movie depicting how they died, the movie producers were heavily chastised for being insensitive to the plights of the parents of the boys who died.

From the rise in the sale of Blackberry phones, we had Blackberry Babes, from the unfortunate lynching of 4 University of Port Harcourt students in October 2012 – Aluu4, a movie called “The Four Boys” was produced.

With the abduction of school girls in the Chibok area of Borno state, there have been at least two movies released.

Now they’re at it again, Nollywood producers have gone ahead to release a movie on the kidnapped schoolgirls who were taken from Chibok, Borno state: One is titled – The Missing School Girls…There is God O and another – Lost Students (Zero Squad) Part 1 & 2.

Hollywood is fond of also making movies centered around real stories, but we haven’t heard any report that a movie on the Malaysian airline that crashed is ongoing.

For an industry that wants to compete with the likes of Bollywood and Hollywood, this is not a good way to go about movie production as even the girls the movie is about are yet to be rescued.

What are your thoughts on these movies?