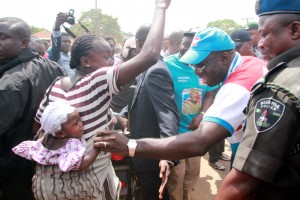 Governor of Ekiti State and candidate of the All Progressives Congress (APC), Dr Kayode Fayemi, has continued his re-election campaign tour of Ado- Ekiti, the capital city with an assurance that he will not relent in the transformation of the city.

The APC candidate who started the last leg of the Ado –Ekiti campaign at Odo- Ado, visited communities including Idege, Igimookogo, Igirigiri, Ita Eku, Olorunsogo, Ilokun, Egbewa, Ajebamidele, Moferere and Olorunda said he is sure to continue the pact which he made with the people of the State when he became Governor.

Dr Fayemi assured that he would continue to pursue issues of water provision, road construction, construction of neighborhood markets and extension of electricity in some new areas in the communities.

He added that government would provide Secondary Schools at Ajebamidele and Odo in Ado Ekiti so that pupils from the community would not need to travel kilometers to the nearest community to get secondary education.

“We always get involved in the communities ourselves, some of their requests were not really novel to me. I know they wanted those things. Roads are a concern in our government, water is what we are working on in a comprehensive manner because we have just designed a master plan for water provision in the state, extension of electricity in the new communities is something that we are also fully involved in and ensuring that we will do for our people. All those things like transformers, secondary schools are in the pipeline and there is no way we won’t do many of those things before the end of the year, and the communities know that we will do them”, he said.

Fayemi added that the construction of Ajebamidele-Omisanjana road was terminated because of the inability of the contractor handling it to carry on with it, saying that it will be re-continued before the year ends.

The Governor urged the people to cast their votes for the APC on June 21 so that he can continue the various developmental projects that his administration has started.

He stressed the need for them to be vigilant on the Election day; saying that they should not allow anyone intimidate and prevent them from exercising their civic right.

Fayemi said the APC is ready to resist anyone who is bringing thugs to the State even as one of the parties had sworn to turn the State to a war front.

“We re ready to succeed. Whoever is bringing thugs from Akure, Abuja, Ibadan or Lagos will meet the resistance of Ekiti people. We should be battle ready because they said they are coming with war. We know who the true friends of the people are. We don’t want those who will defraud the people under the guise of poultry project. Ekiti people have said No!”, he said.

Meanwhile, a university don, Prof. Eddie Olanipekun, has urged Ekiti people at home and in diaspora to support governor Fayemi to continue the transformation of the State.

Olanipekun who is the Dean of the Postgraduate School at the Ekiti State University, Ado Ekiti said the State has witnessed peace and rapid development under Fayemi adding that he should be re-elected so that the State does not relapse into the dark era when citizens’ lives were not secured.

Oil Companies Must Identify Within Their Own Domain – Ibe Kachikwu

I’m On Form At The Moment – Lingard