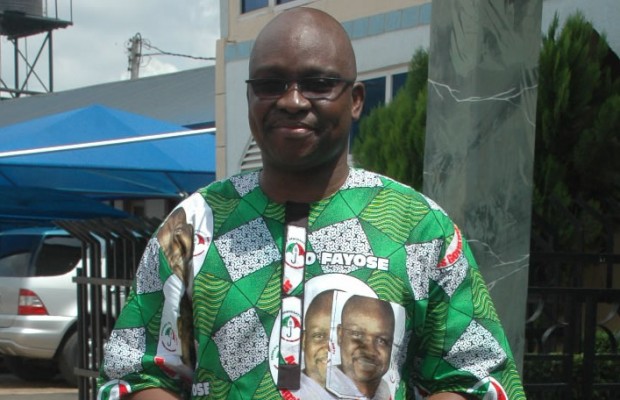 Governor-elect of Ekiti State, Ayodele Fayose, has warned the leadership of his party, the Peoples Democratic Party, PDP, against imposing candidates in subsequent elections in the country.

Fayose, who spoke in Akure, Ondo State, on Tuesday, at a victory and solidarity rally organised by the PDP for his victory in the governorship election, said picking popular candidates, instead of imposed ones, would ensure victory for the party in future elections.

Fayose, who won the June 21 Ekiti governorship election on the platform of the PDP, defeating the incumbent and candidate of All Progressives Congress, APC, Dr. Kayode Fayemi, said imposition in most cases usually tears the party apart with members at cross-purposes to the detriment of the party during elections.

According to him, the syndrome can only be avoided through the sustenance of internal democracy, which he said the leadership has embraced since the party’s formation.

He noted that he was able to win the election in Ekiti because the party leadership gave room for internal democracy where the choice of the popular candidate prevailed.

“The Ekiti election will continue to be a reference point in the history of elections in Nigeria. We were able to win because the people are with us. When they called us different names the people of the state said it is Fayose they want because we are popular with the people.

“I want to charge our leaders to ensure that there is no imposition of candidate because it builds crisis. Each time a candidate is imposed you are working against God”, he maintained.

Fayose also explained that he was not contesting the leadership of PDP in the South-West with anyone, adding that his priority is to win the states in the region for the party and ensure victory for President Goodluck Jonathan in the 2015 presidential election.

Buhari Is A Principled And Experienced Leader – Yakubu Dogara

AIDS Infections are dropping in Africa

Whoever Is Spreading Fake News About Me Will Confess– Ubi Franklin