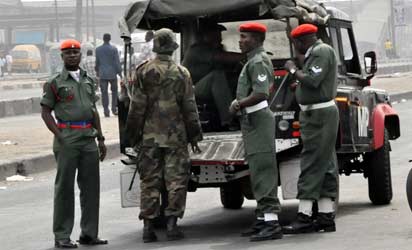 A retired Air Commodore, John Ajaiye, yesterday warned the military against attempting to stage a coup in the face of the security challenges in the country.

Air Commodore Ajaiye (retd), who is chairman of a Pro-Jonathan group, Arise Nigeria, warned his former colleagues that Nigerians would resist any attempt to return the country to military rule.

Speaking to journalists in Kaduna, the retired Air Force officer also commended President Goodluck Jonathan for allowing developed countries to assist in the search for lasting solutions to the raging problem of terrorism in Nigeria.

He said: “It may be becoming tempting for some misguided officers in the military to start thinking about change of government by force, though I doubt if any officer that has served under a military regime would think so.

“The truth is that, yes, like anything handled by human beings, there must be challenges, so is it with our democracy. However, no matter what, Nigerians would do everything to resist another military rule in any form it may take. Nigerian will never put up with another military dictatorship. We shall resist it.

“Yes, we have security challenges, yes we have some evil and corrupt politicians; yes we have social issues, but all these also exist during military rule, and in some cases they are far worse. Coups are indicators of backwardness, lack of civility and an outright insult on the people.

“We that served both under civilian and military rule can tell you that the military is always by far the most negatively affected under military governments”.

Ajaiye noted that under military regimes, well-connected soldiers get promotions above better officers, compromising professionalism in the military.

He added that the military now is far better in terms of welfare, working facilities, professionalism and motivation than under military rule.

“We are trained to defend the territorial integrity of Nigeria, not to assume governance. Put down your khaki and join politics if you want to rule and improve on the situation. So anyone thinking about a military rule now does not know what he is doing”, he said.

On the fight against terrorism, he said: “President Jonathan Goodluck did not create Boko Haram. We must try and understand that we dealing with strange situation never imagined in Nigeria.”

“The President is doing his best to contain the situation. I want to commend him for seeking and getting the cooperation of the US, France, Britain and so on. Now that they have joined in the search for solutions, our problem is now clearer to the world. I sincerely believe that we shall solve the problem very soon. It is sad that some people are using the tragedy of Boko Haram to play politics with it. Instead of cooperating as one people to solve the problems, some politicians and busybodies are causing some undue distractions to the operations going on. Terrorism affects us all, and we must rally behind our leaders to see to its end”, he said.

I Will Never Live The Fake Life You Want – Duncan...

Rotimi Akeredolu Is A Hypocrite For Banning Civil Servants From Politics...

Being Single Is Tough – Toke Makinwa