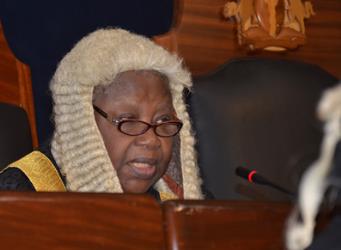 The CJN wondered why so many SANs would agree to represent a judge who has been accused of graft at a mere disciplinary hearing of the National Judicial Council (NJC).

Consequently, she said: “I think the SANs are equally guilty”.

Justice Aloma Mukhtar spoke yesterday in Abuja at the opening ceremony of a three-day Judicial Reforms Conference, with the theme: “Putting Our Best Foot Forward: The Judiciary and the Challenges of Satisfying Justice Needs of the 21st Century”.

The conference was jointly organised by the Nigerian Bar Association’s (NBA’s) Judiciary Committee, the United Nations Office on Drugs and Crime (UNODC) and Access to Justice, with support from Open Society Initiative for West Africa and the NJC’s Performance Evaluation Committee.

The CJN noted that such senior lawyers must be “working in tandem” with the judges under probe.

According to her, corruption remains the Judiciary’s major bane and NJC ensures that judges found culpable “are shown the way out”.

She said: “Corruption has become a real cankerworm that has refused to depart. We receive petitions and we have always tried to hear from both sides because many times, many affected judges complain that they are not given fair hearing.

“Some judges come with as many as six SANs to defend them. I think the SANs are equally guilty. There was one that came with about six SANS, which showed they were working in tandem”.

READ  Buhari Should Focus On Reducing Cost Of Governance - SERAP

The CJN further berated many legal practitioners for always accusing the judiciary of being corrupt, yet, refuse to report corrupt judges to the NJC.

Justice Mukhtar said: “You (lawyers) all know those judges that are corrupt. You all do but you won’t report. You will be the one who will raise the issue that the Judiciary is corrupt, but you will not do your part”.

On independence of the Judiciary, the CJN said insufficient funding should not be an excuse for a Chief Judge to make a “nuisance” of himself at Government House.

“I tell chief judges to manage what they have. Chief Judges should maintain a distance. We should try as much as possible to resist interference from the two other arms of government. The constitution guarantees our independence and we should strive to establish this”, she said.

A guest speaker at the conference and Chief Justice of South Africa, Justice Mogoeng Reetsang Mogoeng, said the Judiciary has what it takes to lead in the turnaround of Africa’s image.

He urged the Judiciary to be “ruthless” in dealing with corruption, adding that this was the only way it could develop the moral courage to deal with corruption in the society.

“If there is one institution that can demonstrate that power can be exercised without corruption, it is the Judiciary. We have to start it. Only then can we deal as harshly as possible with corrupt people when they’re brought before us”, Mogoeng said.

NBA President Okey Wali (SAN) said: “The government must recognise that the Judiciary is the third arm of government”.

He urged the Federal Government to obey a recent judgment of the Federal High Court, Abuja, which ordered that the Judiciary be funded directly rather than through the Executive.

“The NBA reiterates that government must recognise that it is only existence of a virile, fearless and independent judiciary that can guarantee an enduring democratic government and the maintenance of law and order”, Wali added.

I Work So Hard – Sola Ogudu