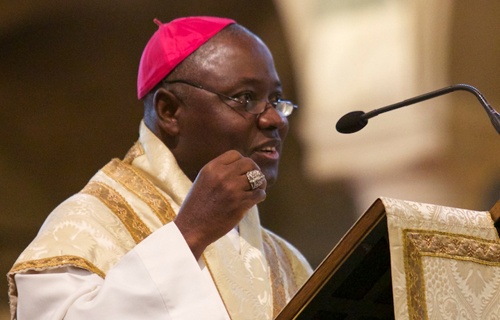 ARCHBISHOP IGNATIUS KAIGAMA OF JOS, President OF THE Catholic BISHOPS’ Conference OF NIGERIA

The Catholic Bishops’ Conference of Nigeria, CBCN, weekend, denied a statement credited to its president, Most Rev. Ignatius Kaigama, accusing the president, Christian Association of Nigeria, CAN, Pastor Ayo Oritsejafor, of dragging Christianity into the mud, following the controversy surrounding $9.3m allegedly found in the private jet owned by the CAN President.

In a statement by its Director, (Social Communications), Rev. Fr. Chris Anyanwu, the CBCN said, “There is a poison of deliberate misinformation in the air, more deadly than the Ebola Virus Disease.

“This may be a symptom of how forthcoming political events may be handled in the media. Some persons want to, at all cost, see the North and the South, Christians and Muslims fight. In God’s name it shall not come to be”.

CBCN described such reports by some newspapers as “not only false and malicious, but a calculated attempt to further sow the seed of disharmony between Catholics and the leadership of CAN”.

The statement also said in part, “While we disassociate ourselves from the newspaper reports, it is important to put the records in the right perspective. Most Rev. Ignatius Kaigama granted an interview with the Hausa BBC Service in Kaduna in which he condemned money laundering.

“All that Archbishop Kaigama said about the $9.3m saga was that the matter should be investigated in-depth to avoid insinuations, psychological projections and unhealthy rumours and gossips. A transcription of his interview will reveal that the words attributed to him were a figment of somebody’s imagination.

“He said nothing about Pastor Ayo hobnobbing with Mr. President or dragging CAN to the mud; neither did he mention the pastor’s name or Mr. President’s.

“He (Kaigama) said that the relevant authorities in Nigeria ought to investigate the issue of the $9.3m arms deals saga dispassionately and ensure that those found guilty of money laundering be punished according to the provision of the existing law of our land against money laundering”.

Take the Interview Spotlights the Reality of Recruiting as Sponsor of...

Didier Reynders meets with UN officials on Burundi and DRC

ACCORD BETWEEN HOLY SEE AND CAPE VERDE

My Government Is Organising Nigeria – Buhari