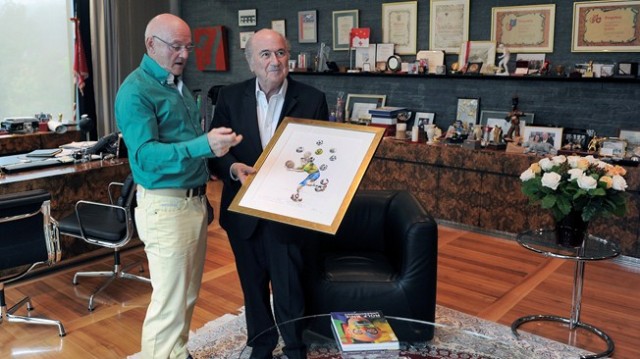 Swiss artist Rolf Knie drew inspiration from the 2014 FIFA World Cup™ in Brazil to create a very special painting entitled ‘Die brasilianischen Ball-Artisten’ (‘Brazilian Ball Artists’), presented to FIFA President Sepp Blatter as an exclusive gift. “Sepp has made football and FIFA what it is today,” Knie explained. “For that he has my utmost respect and complete admiration.”

Depicting a player juggling 13 balls, the picture is the first – but probably not the last – footballing subject painted by the renowned artist, who hinted: “It could become the start of a whole series.” For now at least, the piece is a one-off now displayed proudly in the President’s office.

Along with the painting, Knie handed his old friend the first edition of his recently published biography, Ungeschminkt (loosely translated as ‘Warts and All’). Football features prominently in the book, which recounts how Knie was heading for a professional career with FC Zurich during the 1960s before deciding to return to his parents’ circus.

The artist makes a passionate appeal to Blatter in the book, saying: “Introduce video evidence at last and scrap the offside rule.”