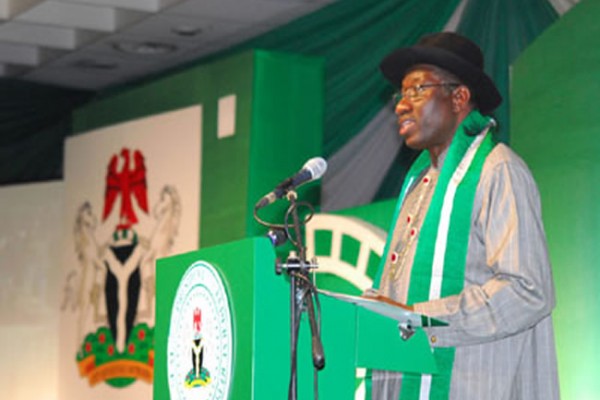 Ahead of the 2015 presidential election, the Forum of Former Deputy Governors in Nigeria has endorsed President Goodluck Jonathan for a second term in office.

The ex-deputy governors called on Jonathan to publicly declare his intention to run for re-election in 2015 to put to rest, the anxiety of concerned Nigerians on the matter.

Speaking on Monday in Uyo, the Akwa Ibom State capital, Secretary-General of the Forum, Dr. Christopher Ekpenyong, said the resolution by the Peoples Democratic Party to adopt Jonathan as its sole candidate was a welcome development.

Ekpenyong, a former Akwa Ibom State deputy governor, noted that Jonathan’s adoption by PDP was in line with the tenets of the party.

He said, “We are happy it happened. It is strictly a PDP affair; the PDP National Executive Council is the only organ authorised by the party’s constitution to endorse or field whoever it wants as flag-bearer of the party in any elections.

“President Jonathan’s endorsement is a merited one going by the constitutional provision of two-term tenure for every president and governor. Aside the above, President Jonathan’s performance within this short period of his Presidency is unprecedented”.

Ekpenyong recalled that the forum was the first group to endorse the president for another term.

He said, “You could recall that the forum of former deputy governors in Nigeria was the first to let Nigeria know it is imperative and proper to allow the president go for another term.

“We also pleaded with him to contest the 2015 Presidential election, we did not do that because he is our colleague; we did that after considering the national interest.

“We know that any dislocation in the current journey will cause dire consequences of delay in developments, progress and growth for our nation”.

As crises worsen, UN seeks $99 million more for refugees in...

Anturis Launches New & Enhanced Version of Its IT Monitoring &...