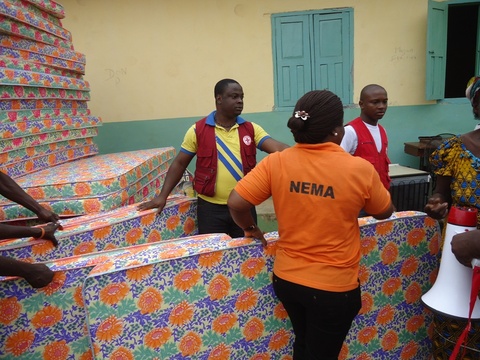 The Federal Government on Monday gave additional relief items to Internally Displaced Persons (IDP) in Chibok, Borno, to further cushion the hardship in the area.

Alhaji Muhammed Kanar, the North-East Zonal Coordinator of the National Emergency Management Agency (NEMA), said in Yola, Adamawa that the items were given in compliance to the directive from the presidency.

He said the agency was currently taking care of registered 10,376 IDPs in Chibok and its environs.

He also said experts from the Safe School Initiative (SSI) also accompanied NEMA team to conduct a needs assessment on schools destroyed by the Boko Haram insurgents in the area.

The coordinator assured that the agency would provide boreholes to ease the perennial shortage of drinking water in the affected communities.

Receiving the items on behalf of the community, the District Head of Chibok, Mr Modu Zanna, who was represented by Alhaji Lawan Yerima-Amdan, thanked the presidency for the gesture.

He, however, appealed to the government to expedite action on the release of their abducted girls.

“We thank President Goodluck Jonathan for identifying with us; we hope that he will intervene on the issue of our girls”, Zanna said. (NAN)

Mbappe Can Move For The Money – Sergio Ramos

Who Will Decide The UEFA Champions League Final?