The Executive Chairman of the Economic and Financial Crimes Commission, EFCC, Ibrahim Lamorde has  charged the media to improve the current narrative on the Commission by paying attention to all cases being investigated or prosecuted by the EFCC.

Lamorde who spoke at the opening of a one day workshop on Effective Reporting of Financial Crimes for journalists drawn from the five south eastern states at Golden Villa Hotels and suites, Enugu on Monday, November 10, 2014, described as erroneous, the perception by a section of the media that the Commission was maintaining a low profile.

He implored the media not to be selective in their choice of cases to report. “The current situation where media interest in corruption cases fizzles after arraignment is unhealthy. You must be prepared to track the trial of corruption cases as that will not only help in putting such matters in public consciousness, it will also be a disincentive for compromise by errant judicial officers. 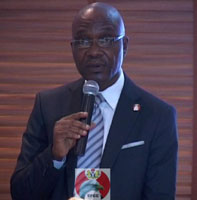 “As I speak, the Commission is investigating a case of fraud in an old generation bank in Port Harcourt, where a customer, working with his wife who is a banker with a new generation bank, defrauded the bank of N855million. The suspect, one  Uchenna Ogbonnaya Dike cashed in on system glitches to perpetrate the scam over a period of five months, by transferring funds from the bank into accounts in the new generation bank. Other accomplices in the scam are currently on the run. But the Commission will get them as we are determined to check all incidences of fraud in the banking sector”, he said.

The EFCC boss, who was represented by Mr. Osita Nwajah, Deputy Director, Public Affairs further disclosed that the Commission had recovered over N5billion in the oil subsidy fraud case and property worth a billion naira in the pension fraud matter.

He commended the media for their support over the past 11 years and urged them not to relent but to be aggressive whistle blowers in the delicate assignment of ridding our nation of the corruption malaise. 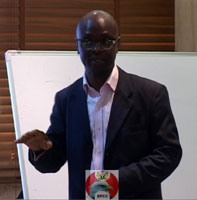 Dotun Adekanmbi, former deputy director, Communication, Industrial and General Insurance Company Limited and lead strategist, Media Logistix, who presented a paper on the place of social media in financial crimes reporting, charged journalists to explore the new opportunities for information gathering and confirmation provided by the new media. According to him, the improvement in telecommunications makes the social media the new frontier for communication, stressing that only those who want to be left behind would afford to ignore the sector.

He however sensitized participants to the perils of the social media, harping on the dangers of over exposure and the need for constant checking of information received through the available platforms.

Egbuchulam Nwaja, former news editor, Ebonyi state Newspaper Corporation, in his paper entitled, Investigative Journalism and Financial Crimes Reporting, examined the reformative potentials of investigative reporting. “Investigative reporting reveals scandals and shames corrupt individuals. It uncovers secrets somebody wants to keep hidden. It is simply good reporting that comes out of the traditional view of journalists as “watch dogs” whose mission is to sniff out wrongs, point fingers at those to blame, and report in a way that brings about positive change”.

While noting that economic constraints and interest of owners were a major encumbrance to investigative reporting in Nigeria, Nwaja nevertheless advised practicing journalists to embrace the craft. “The media should turn their investigative search lights on corruption in the private sector, just as they are doing to the public sector”, he said.

Blessing Olaifa, assistant editor, The Nation Newspapers, in his presentation stressed the need for media practitioners to be mindful of the ethics of the profession in the discharge of their responsibilities.  According to him, the media is not just the fourth estate of the realm, “It is the realm upon which all estates are held accountable. Therefore, it must be above board”.

Olaifa reminded participants of the need to take “advantage of some of the institutional mechanisms and legal instruments available for use to fight economic crimes.”

Most of the workshop participants commended the quality of the presentations, while calling on the Commission to make the programme a regular feature in its media calendar.

Over 50 journalists from the five states of the South East zone attended the workshop.