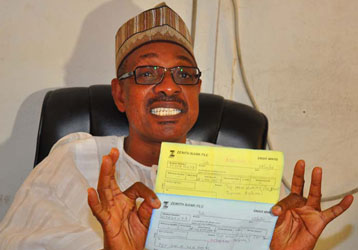 The son of Nigeria’s first Prime -Minister, Dr. Abdul-Jhalil Tafawa-Balewa, has vowed to challenge President Goodluck Jonathan for the presidential ticket of the Peoples Democratic Party.

He made this position known in a chat with journalists in Abuja on Friday when he returned his presidential nomination and expression of interest forms to the office of the National Organising Secretary of the party, Alhaji Abubakar Mustapha.

The Russian trained medical doctor turned politician said he had filled the forms and was confident of defeating President Jonathan, adding that the president has refused to do some basic things needed to uplift the living standards of ordinary Nigerians.

Speaking on his aspiration, Tafawa-Balewa confirmed that his widely-publicised visit to Ijaw national leader, Chief Edwin Clark, on November 6, where it was claimed that he had agreed to withdraw from the race for President Jonathan, was a set-up.

Claiming that he didn’t know that journalists had been planted in the house by the ex-federal commissioner for information, Tafawa-Balewa claimed the visit was supposed to be a private affair, adding that it was because of the utmost respect he had for Chief Clark that made him to concur with all he said concerning his alleged withdrawing from the race for Mr. Jonathan.

He said, “I’m here to submit my form for the presidential race. Did I ever tell anyone that I have withdrawn from the race? I went to the house of Clark for another thing and he said another thing during his press conference. It was Clark who said I was withdrawing. We need a change as too many people are suffering and are in poverty

“I never withdrew from the race. There was no agreement with anyone that I was doing so. But I said that I agree to everything Edwin Clark said. I never, ever said I was withdrawing.

“I didn’t know that there would be journalists waiting for me at Edwin Clark’s house. I only went there to see him. I’m not working for any tribe or individuals. I’m genuinely in the race”, he insisted.