Governor Emmanuel Uduaghan and Peoples Democratic Party (PDP) chieftains have commended stakeholders of the party in the State for the successful conduct of the Ward Congresses held on Saturday November 1, 2014. 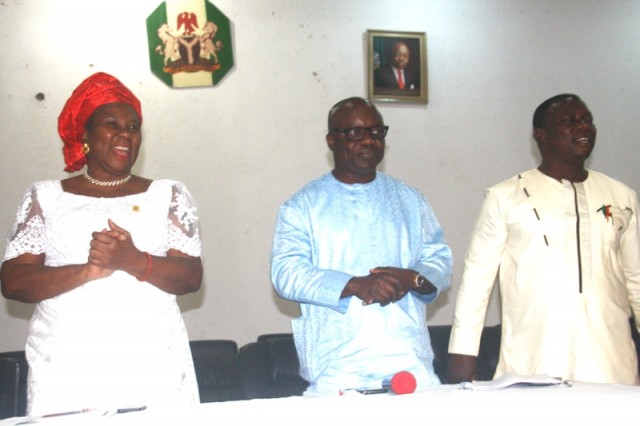 Governor Uduaghan who is the leader of the party in the State ascribed the peace witnessed during the exercise to the maturity of party faithfuls.

He observed that it was a good development that aspirants for elective offices in the State were not taking their aspirations as do or die rather were talking on ways to move the State forward.

While commending the Anenih’s led PDP team that conducted the Ward Congresses in the State, the Governor urged members of the PDP to display the same level of maturity and peaceful engagements in the primaries of the PDP and during the general elections.

Dr. Uduaghan  advised the aspirants to continue to tolerate each other as there is no way they can be one hundred percent happy, adding that they have to learn to be patient remembering that one life lost, one property lost can never be replaced.

He reiterated that in the struggle for whatever position one is vying for, one should keep a window of friendship, so much so that, when one gets the ticket, he could reach out to the other aspirants for their support during the general elections.

Anenih on her part commended members of the PDP in Delta State for the success recorded during the Ward Congresses and urged them to maintain the existing peace and security witnessed during the exercise.

The Acting Chairman of PDP Delta State, Chief Emmanuel Ighomena also observed that the ward congresses in the state were better than the previous exercises, stressing that this ward congress was organised without any disagreement or rancour.

They urged the Anenih-led team to carry on in the remaining congresses with the same spirit to ensure that the State remained peaceful.

House Of Reps To Initiate Policies To Improve Conditions Of IDPs

No Corrupt Persons, Irrespective Of Party Affiliation, Will Escape Justice –...