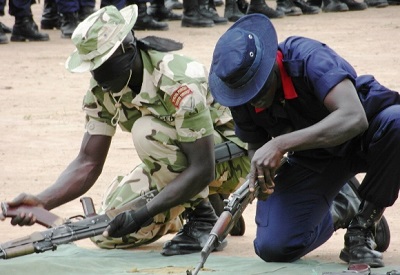 At least 142 men of the Nigeria Security and Civil Defence Corps (NSCDC) have been trained on counterterrorism and weapons handling by the Nigeria Army.

The Commandant of the 31 Artillery Brigade, Brig.-Gen. Abba Dikko, who made the disclosure yesterday at the Batch C passing out ceremony in Minna, the Niger State capital, said the training involved practical and theories for 129 workers of the NSCDC state command and 13 from the zonal command on weapon handling.

According to the Army Commandant, the lessons on counter-terrorism and counter-insurgency were added to the curriculum to get the participants better equipped for contemporary security challenges.

“The training commenced with a directive from the army headquarters to train NSCDC personnel nationwide on the same subject.

“The participants exhibited sustained interest and good character, which enhance the smooth conduct of the course”, Brig.-Gen. Dikko said.

The Course Officer, Cpt. Labiwa Madugu, said the participants were trained on various kinds of weapons, adding that the practical aspect was conducted at the cantonment’s firing range.

“The training cut across practicals and theories and the general performance score of the training was put at 60 per cent”, he added.

The NSCDC Zonal Commander, Alhaji Saidu Rabe, who was represented by the Niger Commander, Mr. Micheal Ochugwo, called on the trainees to put to use what they learnt to improve the services.

Muhammadu Buhari Will Seek Re-Election In 2019?

Some People Are Planning To Murder My Aides And Kill Me...

Ohanaeze To Buhari: Relocate Boko Haram Prisoners From Anambra In The...

Without Peace, There Can Be No Development – Jonathan