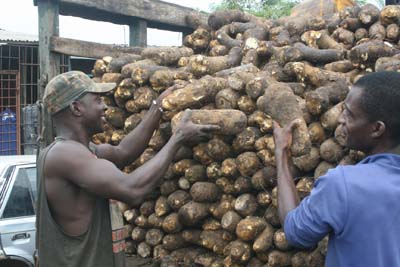 A Geneticist at the University of Ibadan, Dr Morufat Balogun, on Sunday said Nigeria produced 70 per cent of the yam grown annually and globally.

Balogun, who is also a researcher at the International Institute of Tropical Agriculture (IITA), Ibadan, said this in an interview with the News Agency of Nigeria (NAN) in Ibadan.

She said while Nigeria grew 70 per cent of yam annually, other countries shared the remaining 30 per cent.

She said that between 37 and 40 million of metric tons of yam were produced in the world annually.

“Nigeria alone produces 70 per cent of yam every year all over the world, the remaining 30 per cent is shared among Ghana, Côte d’Ivoire, Togo and Benin Republic”, Balogun said.

She said in some areas in Southern America, some varieties of the commodity were also produced adding that the production of yam both for import and export largely depended on Nigeria.

“If Nigeria stops to produce yam today, the global production of yam will reduce by 70 per cent and it will affect exportation”, she said.

The expert said that production of yam if properly harnessed, could turn around the standard of living of millions of farmers and other investors interested in the business.

She advised farmers to plant more yam so as to improve the economy, saying that the crop could liberate Africa from excessive rice consumption. (NAN)

BBNaija’s Tobi And Kim Are No Longer Together – Gistlover

AV-TEST: Secucloud Mobile Security App named as one of the world’s...

2baba’s Son Debuts As An Entertainer

AKA And Bonang Matheba Playing With The Media?