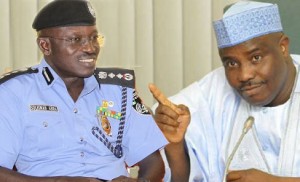 Police might have withdrawn the security details of Speaker House of Representatives Aminu Tambuwal, but he is to get them restored by virtue of his added status as the governorship candidate of the All Progressives Congress in Sokoto State.

The provision of Police security for Tambuwal, according to Vanguard sources, was borne out of the duty by the Police High Command to ensure that all successful candidates of all the political parties, are given security protection because of their status before and during the 2015 elections.

The source noted that the provision of security for the Tambuwal had nothing to do with the withdrawal of his security details following his defection from the PDP, as the issue was a separate one that is still in the law courts.

Force Public Relations officer, CP Emmanuel Ojukwu, who spoke to Vanguard said “The Police will do the needful in protecting Alhaji Aminu Tambuwal and all other contestants”.

The Biggest Problem Nigerians Have Is Their Addiction To Oil Revenues...