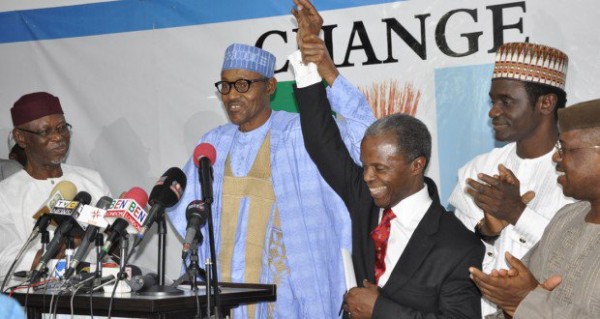 Founder of the largest charismatic church in Europe, Pastor Sunday Adelaja is supporting the candidature of the All Progressives Congress (APC), General Muhammadu Buhari, and Professor Yemi Osinbajo, in the February 14 presidential election.

According to Adelaja, founder and senior pastor of Kiev-based Embassy of the Blessed Kingdom of God for All Nations. The church plays an active role in the life of Ukraine with more than 700 churches in over 45 countries and was an influencing factor in the Ukrainian Orange Revolution.

Adelaja said on his Facebook page on Saturday that he could confidently vouch for Osinbajo, adding that with his emergence, Nigeria as a nation had started releasing her best sons to leadership positions in governance.

According to him, the choice of Professor Osinbajo was not just a choice made by man, God handpicked him as Buhari’s running mate.

“I would dare to say that I personally do not know any other Christian leader in Nigeria with the kind of impeccable reputation, character and integrity as that of Professor Osinbajo. Friends, the man is real!”

According to Adelaja, “There is no other person like Professor Osinbajo! Anyone that knows him very well will tell you the same thing. He is in a class of his own. I can confidently vouch for him and say to my fellow Nigerians that with the emergence of Professor Osinbajo, we can say at last that Nigeria as a nation has started releasing her best sons to the seat of government.

“Unfortunately what has been happening in Nigeria in the last six years can only be compared to a situation where the kings of our land have been like children, who feast in the morning. The predictable outcome of such a predicament is a tale of woes.

“As a result, Nigeria has not been able to set herself free from all sorts of calamities, adversaries, woes and troubles, because our rulers have been as children and our princes (government officials) are those who like to feast in the morning.

“No purposeful person goes to feast in the morning, the morning is a time of labour, hard work and diligence. But from the stories we have been hearing of how our natural resources and billions of dollars are being depleted, we could see that our princes are on a ‘shopping and spending spree,” he added

Faleti Was A Supporter Of Youths – Jide Kosoko