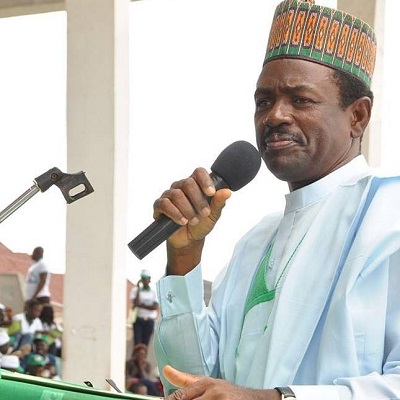 The governorship candidate of the All Progressives Grand Alliance (APGA) in Nasarawa State, Labaran Maku, on Wednesday responded to the tirades against him by Senate President David Mark and other leaders of the People’s Democratic Party (PDP), saying they are part of a blackmail hatched against President Goodluck Jonathan ahead of the February general elections.

Mark and Ahmadu Ali, who is the Director-General of the Jonathan presidential campaign team, as well as the party national chairman, Adamu Muazu, had on Tuesday taken turns to berate Maku, for allegedly dropping the president’s name in a bid to actualize his governorship ambition on the platform of APGA.

The party leaders labeled the erstwhile information minister as an ingrate, and insisted he will have to tender apologies before he will be allowed back into the PDP, should he want to return.

But Maku, who dumped the PDP after his petitions protesting the outcome of the governorship primary in the state last year was ignored by the national leadership of the party, said he was surprised that Mark, Ali and Muazu would peddle lies suggesting he claimed to have had President Jonathan’s blessings to leave.

In a statement by his campaign organisation, Maku said he never claimed before anybody that he spoke with the president and had his approval to leave for APGA.

“The truth of the matter is that Mr. Maku never told anyone even while contesting for the governorship ticket in the PDP that the president was behind him, neither did he suggest to anyone when he decamped to APGA that President Jonathan supported his decision”, the statement, signed by Barrister Zakari Edego, spokesman of the campaign organisation said.

The statement said “it’s especially curious that Senator Mark has remained mute over the defection in his own native Benue State of former Minister of State for Trade and Investment Dr. Sam Ortom and former PDP National Chairman, Senator Barnabas Gemade who have gone all the way to the opposition APC to contest for the governorship and senatorial positions respectively.

“Why has Senator Mark not condemned these defections from his native Benue state? Why the undue attention on Mr. Maku and Nasarawa State?”

“The import of these attacks on the APGA governorship candidate clearly shows that there is panic in the PDP in Nasarawa State following the emergence of Mr. Maku as the flag bearer of APGA”, the statement added.

Edego noted that Maku left the PDP because he was aggrieved and was not given any reprieve after the governorship primary election which outcome, he said was pre-arranged to serve religious purposes.

“Before Mr. Maku left the PDP, he followed the due process to seek redress over the highly bungled governorship primaries including petitioning the PDP Governorship Primaries Appeal Panel under the chairmanship of the National Chairman, Alhaji Adamu Mua’zu on the irregularities and other anti-democratic activities that led to the imposition of Alhaji Yusuf Agabi as the candidate of the PDP.

“However, the appeal panel neither acknowledged nor invited Mr. Maku to defend the appeal he filed against the conduct of the governorship primary election.

“Since loyalty is crucial in party politics, why was Mr. Maku, a loyal party member and leader of the party in Nasarawa state for four years schemed out of the PDP primaries on the basis of religion?”

We Must Go Beyond Arresting A Token Of Herdsmen – Wole...