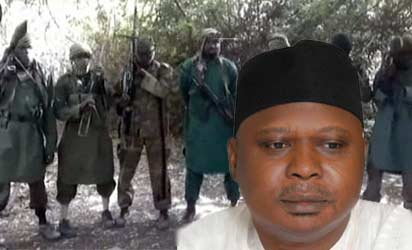 Minister for Special Duties, Alhaji Kabiru Turaki, said on Saturday that it was illogical to link the activities of the Boko Haram insurgents to the Federal Government.

Turaki said this while speaking at the PDP Presidential Rally held in Maiduguri.

He described individuals peddling such romour as “most unpatriotic”.

“It is an open secret that government does not have a hand in the current insecurity facing us.

“Although, some people have been spreading falsehood linking government with the problem”, Turaki said.

“The people of Borno are well known for their intelligence. I am sure that they know very well that government cannot have a hand in this mess”, he said.

Turaki recalled that the regime of Alhaji Shehu Shagari faced a similar problem.

“We have the Maitastine upraising during the Shagari regime; nobody then blamed the president for the crisis.

“We also had a similar crisis during the Military Regime of Gen. Mohammed Buhari, nobody blamed him for the problem.

“But now politicians are trying to blame our president for the Boko Haram crisis. This is illogical no doubt”, Turaki added.

He, however, advised Nigerians to seek divine intervention towards ending the insurgency.

“As Muslims, we believe that everything is from God. We must return to him and seek help rather than shifting blame”, Turaki said.

Turaki said that the government had adopted numerous strategies towards ending the crisis.

Those Creating A Faction In APC Are Mischievous And Ill-Advised –...

It Is Too Soon To Be Seen As A Contender For...