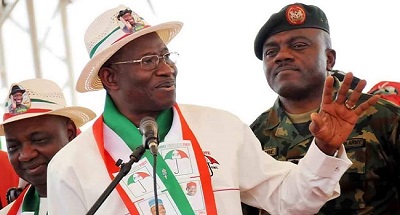 The Presidency has given 12 reasons why Nigerians must re-elect President Goodluck Jonathan for a second term of four years during the March 28 presidential election.

This was contained in a piece titled “12 reasons to support Jonathan” published in the latest edition of the in-house magazine of the State House, Abuja, called Villascope.

Some of the reasons listed include the present administration’s strides in road construction, railway rehabilitation, remodeling of airports, transformed agriculture sector and increased access to education.

According to the bulletin, Jonathan met 4,500km of motorable roads but constructed/rehabilitated 25,000km of roads.

This, it said, had drastically reduced travel time nationwide.

It added that about five million Nigerians now travel by train after the present administration reavmped the nation’s railway.

On education, it said, “Jonathan built 125 Almajiri schools, 14 universities and special schools for girls in 27 states.

“He gave 101 scholarships to first class graduates to pursue postgraduate courses in the best 25 universities in the world.

“He sponsored 7,000 lecturers of federal and state universities and polytechnics for postgraduate studies to improve quality teaching”.

The Presidency further said 61,000 housing units had been built in the six geo-political zones of the country.

It said the Jonathan administration also set up the Nigerian Mortgage Refinancing Corporation to provide about 200,000 affordable mortgages in five years.

On power, it said the present administration had completed 10 power plants, initiated the Nigerian Power Roadmap and successfully privatised the power sector.

It said under Jonathan’s watch, power generation was increased from about 2,000MW to over 4,000MW.

On health, it said life expectancy had increased from 47 to 52 while maternal mortality and under-five mortality have dropped by more than 50 percent.

It also pointed out that Jonathan transformed the economy from third to first in Africa.

“With a GDP of over $500bn, Nigeria is the 26th largest economy in the world and the first investment destination in Africa”, it added.

It said Nigerians’ participation in the lucrative downstream of oil and gas sector had been increased, saying Jonathan’s local content law has given birth to an indigenous oil terminal facility with a capacity for 50,000bpd.

Serie A Is Not Boring — Allegri

Rihanna And Hassan Jameel Go On A Date In London