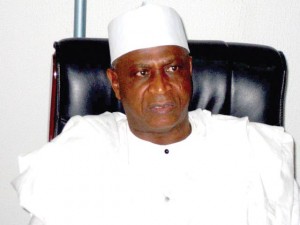 Former Acting Chairman of the Peoples Democratic Party (PDP) and now an All Progressives Congress (APC) chieftain, Abubakar Baraje, says more PDP governors will defect to the APC before the presidential polls.

Baraje said this in Ilorin, during his 64th birthday anniversary. He stressed that the outcome of the presidential election in Nigeria must be masses-friendly to boost the nation’s growing democracy.

The Nigerian masses truly deserve a change, he said, blaming PDP for misruling the country. Nevertheless, the APC will accept in good faith, the outcome of the polls “if it is free, fair and credible.”

“Even if we have free, fair and credible elections and the PDP wins, are the Nigerian masses ready to accept it? Are they ready to go for another four years of injustice and poverty?” he asked.

Also speaking, Governor Abdulfatah Ahmed of Kwara State defended the boycott of the presidential debates by the APC candidate, Muhammadu Buhari, saying that debates are not the key issues in electoral matters but interactive sessions with electorates.

“Debate is not the key thing, as far as I am concerned. It is the interaction with people, where there would be questions and answers,” he said. “Debate is good but you may not have the opportunity of asking the questions that are specific and getting the right answer, unlike during interactive session.

“I intend to hold (interactive sessions) too as soon we finish campaign, where we meet with stakeholders – labour unions, students, market women, artisans – discuss with them, get their pulse and create the platform of change in the right direction.”

He urged the people of Kwara State to vote for Buhari because of his integrity, truthfulness and for fair play and progress. He recalled that Kwara massively voted for Jonathan in 2011, but has nothing to show for it.