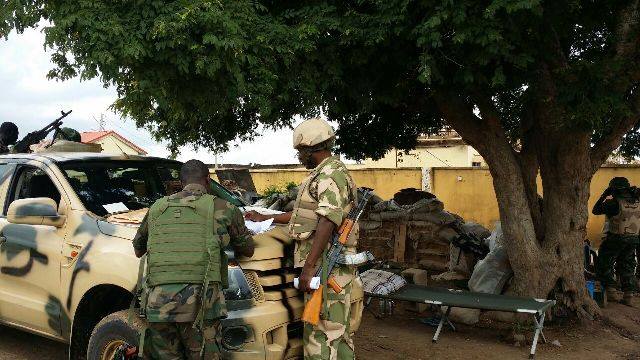 The Nigerian Army on Sunday dealt a heavy blow on Boko Haram as scores of the insurgents were reportedly killed in an attempt to attack Damboa town, the headquarters of Damaboa Local Government of Borno State, local residents and a member of the Civilian JTF have said.

A resident of the area, Aisami Bukar who escaped to Maiduguri, the Borno capital, disclosed that the insurgents, who came in large numbers at about 12:00 noon, were sighted by troops of 195 battalion of the Nigerian army, who repelled their advancement.

He said that the terrorists were attempting to attack Damboa from Kalla village just two kilometers from Damboa town when the military lunched artillery guns and killed scores of them.

“Scores of the Boko Haram insurgents who attempted to attack Damboa at about 12:00pm had a bad outing as the troops of the Nigerian Army intercepted them at Kalla village at the outskirt of Damboa.

“Insurgents were intercepted by the soldiers, who swiftly reacted by shooting artillery missiles and burnt them; they crushed all of them, as scores of them were killed in the process”, Bukar said.

A member of the civilian JTF, Haruna Isa, corroborated the story, saying that “the army did a good job in Damboa. It would have been a different story today. But we thank Allah that the boys did not have luck this time”.

He pointed out that corpses of the insurgents and their vehicles were burnt and littered all over in the bush.

Zimbabwe learns from Nigeria’s Abuja Carnival to organize its own carnival...