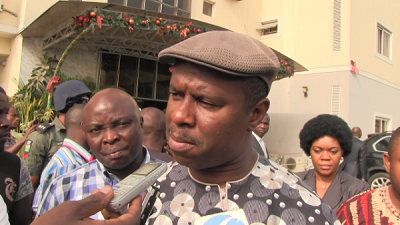 The All Progressives Congress governorship candidate in Rivers State, Hon. Dakuku Peterside, said on Saturday that police corporal Ifeanyi Okorie, laid down his life in defense of Democracy in Nigeria.

The governorship candidate, represented by his running-mate, Mr Okorie Asita, made the remark in Port Harcourt, when a delegation of the APC leadership visited Mrs Gift Ifeanyi, widow of the late policeman, who was gunned down in Okrika on February 18.

He said the APC never foresaw a day when hired thugs would disrupt the party’s campaign rally, leading to the death of the policeman.

“Your husband laid down his life for the sake of peace in this country and for our sake”, Peterside said. “We did not expect this to happen, we had gone to other Local Government Areas to campaign and we never had this ugly experience”.

The APC flag bearer added: “As you are mourning, all of us are crying as we owe him a depth of gratitude because it could have been any of us if he was not there”.

He said as a people, the party had come to assure the family that they were not alone in pain.

“Your husband laid down his life defending democracy, he died fighting to maintain peace, he died securing us and we cannot forget that in a hurry”.

Peterside said the party had seen the little children Okorie left behind, adding that, “we are all parents here, so we understand the pressure his death would expose you to”.

“Children always want to live like their parents; they feel their parents know it all, so they ask all manner of questions.

“Your husband laid down his life defending democracy, he died fighting to maintain peace, he died securing us and we cannot forget that in a hurry”.

Peterside assured that the death of Okorie would not stop the children he left behind from realizing their destiny as they would benefit from the state government’s scholarship.

In her response, Gift thanked the delegation for the condolence visit and for appreciating the pains she would face raising four children without her husband.

Barcelona Is Focusing On La Liga, Not UCL – Ernesto Valverde