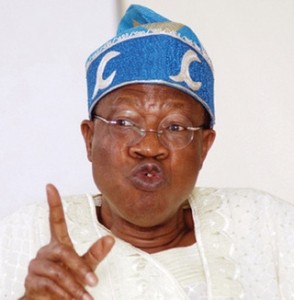 All Progressives Congress (APC)’s National Publicity Secretary, Alhaji Lai Mohammed, has described the attacks as suggestive of the “desperation, despondency and dejection” of the ruling party to the Buhari phenomenon across the country.

“What has come out clearly in the media interaction between the PDP and the media yesterday (Tuesday) is desperation, despondency and dejection on the part of the PDP,” the APC national publicity secretary told Vanguard yesterday, in reaction to the attacks.

“When you have an interaction with a gathering like PDP governors, you expect something much more elevating. You see, they lost a beautiful opportunity to even sell their party.

“When they concentrated on attacking an individual, people went away with the impression that they have run out of ideas, and they have run out of issues. So, that is why you find that if you took a poll yesterday and a poll today on the popularity of PDP you will find out that it sank lower especially against the fact that this man who they have been attacking almost daily has never uttered a word in retaliation because what they are attacking is the integrity of this man, but his integrity is unassailable.
PDP has already accepted defeat

READ  Churches, Mosques Will Be Reopened On August 7 – Sanwo-Olu

“I think Nigerians have now got to the point of asking PDP: do you have anything in stock for us? Why don’t you advertise your own wares? Honestly, I looked at PDP yesterday and was very sorry for them.

“From what happened yesterday, PDP has already accepted defeat because they are saying already that Buhari will not have two terms, that he would have one term. Why should that become the concern of the ruling party? They are already behaving like the opposition party.

“I think Nigerians are not taken in by this smear campaign. On the contrary, the man is becoming more and more popular and they are spending so much money, so much time, so much effort vilifying this man. Even those APC members who are not on the ballot, they are spending time and money to vilify them. Is that what this campaign is all about?” he said.

Leicester City Win Would Be Greatest Since Ipswich – Ray Crawford