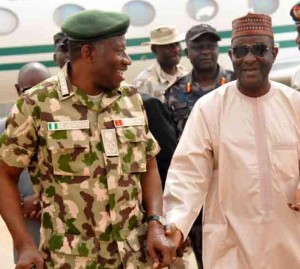 Speaking at a rally of the PDP women’s wing in Yola, the state capital, where the first lady, Dame Patience Jonathan was represented, Ngilari commended the president for reclaiming towns from Boko Haram.

“We are going to deliver the state to your husband, as you go back, tell the president that we are happy for his commitment to stand with us against Boko Haram. We want to tell the president that the only way to show him our appreciation is to give him maximum votes. Five months ago nobody in the state would believe that we could gather together like this for a political rally”, he added.

The governor also announced the 11th of March as Women’s Day in Adamawa State.

In her remarks, the representative of the first lady, wife of the vice president, Hajia Aminat Sambo, commended the governor for acknowledging the contributions of women in nation building.

She expressed satisfaction with the support the PDP enjoys in the state, saying she was confident that the party would win the state in the forthcoming elections.