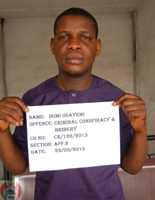 A suspected internet fraudster, Dumi Osayemi, a.k.a Larry, is currently ruing his attempt to compromise operatives of the Economic and Financial Crimes Commission, EFCC.The 22-year-old, who was arrested following a tip-off about his suspicious flamboyant lifestyle, allegedly offered a N6, 900,000.00(Six Million Nine Hundred Thousand Naira) bribe to EFCC operatives so that he could be let off the hook.

At the time of his arrest, the following items were recovered from him: a 2011 C350 Mercedes Benz car and a Toyota Venza.
The suspect is also said to own a tastefully furnished four-bedroom bungalow.

Osayemi, who claimed to be a ‘Yahoo Boy’, confessed to have duped one Stephanie, an American lady, the sum of $75,000, with which he acquired some of the seized properties.

The suspect allegedly spoilt his girlfriend, Dorcas, and her mother, Rose, with his ill-gotten wealth.

The suspect will soon be arraigned in court.

I Could Not Say No To AC Milan – Ismael Bennacer