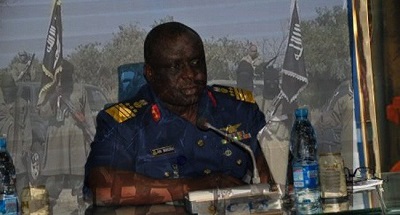 As four hundred and eighty four personnel were on Friday admitted into the Nigerian Air Force, Chief of Air Staff, Air Marshal Adesola Amosu, warned them to guard their utterances and remain vigilant in the fight against Boko Haram insurgency.

The Air Chief stated this in his address during the passing out parade of the 484 Recruits, who received basic military training course for six months at the Air Force training centre.

Represented by Chief of Policy and Plans, Air Force Headquarters, Abuja, Air Vice Marshal (AVM) James Gbum as the parade reviewing officer, Amosu charged the airmen to do the nation proud by maintaining the highest standard of professionalism, courage, and discipline whenever the need arises, and assured them of better welfare package in the course of their duties.

“Indeed, you are coming into the Air Force at a critical time when the nation is facing some internal security challenges. You must therefore remain vigilant, guard your utterances, and mind your conduct at all times.

“Some of you will be involved in internal security operations as you go to the field. You should take advantage of the knowledge and skills that you have acquired during your training, to carry out your assignment diligently and professionally, to defend the territorial integrity of the country, while safeguarding lives and property”, he said.

Fifa to give more to confederations and member associations

Cray to Present at Two Investor Conferences in March

The Measures To Resist Coronavirus At A/Ibom Airport Is The Best...