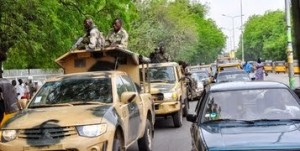 The presidency has ordered the immediate withdrawal of all security personnel attached to politicians and individuals believed to be close friends and associates of the president and top government functionaries, reports have said.

The security personnel involved include the military, police, Department of State Services (DSS), armed squad of the para-military like the Nigeria Immigration Service (NIS), Customs, Nigeria Prisons and Nigeria Security and Civil Defence Corps (NSCDC) officials, among others, the Nigerian Tribune gathered.

It was learnt that the security personnel were massively deployed to individual politicians, who were in support of the re-election of President Jonathan and PDP in general, when campaign was about to start. They served as escorts and personal guards of individuals close to the President in Abuja and their country homes.

One of the soldiers attached to a known politician from the Niger Delta, residing in Asokoro District, Abuja who spoke under condition of anonymity, told Nigerian Tribune on Monday, that all of them have been directed to report at the base with immediate effect for further briefing.

“We saw our withdrawal coming since the President having lost the election. We have been with our Oga since, on the orders from the presidential villa and now going back to base.

“We don’t know our new posting yet. One of my friends attached to an ex-militant leader in Bayelsa State phoned me to confirm this, so the tea party is over for us and the politicians. We will now have time for real work,” he declared.

Africa Should Pull Together And End This Division – AKA