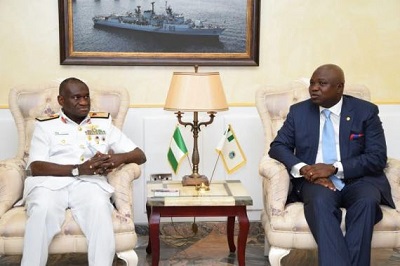 Lagos State Governor, Mr. Akinwunmi Ambode, on Monday urged the Chief of Naval Staff, Admiral Usman Jibrin, to use his good offices to assist the state in the fight against crime.

The governor, who spoke at the Defence Headquarters, Abuja, during his visit to Jibrin, expressed his displeasure at the unfortunate and the current spate of robberies in Lagos State within a week into his administration, which informed his urgent audience with the Naval chief.

In a statement by his Chief Press Secretary, Habib Aruna, the governor said Lagos, being the foremost commercial hub of the country, was strategic and could not be a breeding ground for criminals.

Some bandits struck at two different financial institutions within Ikorodu community last Wednesday and carted away an undisclosed amount of money before fleeing via the waterways.

According to the Governor, his administration has resolved to evolve strategies that will frontally confront insecurity through the collaboration between the state government, the private sector and security agencies.

He praised the efforts of the Nigerian Navy in tackling criminal activities in parts of the state.

In his response, Jibrin, who was flanked by other senior officers of the Nigeria Navy, congratulated the Governor on his election and inauguration.

The CNS said Lagos State, being the major operational hub of the Nigerian Navy as a coastal state with vast maritime potential, could not be allowed to be a haven for criminals.

Jibrin added that there was the need for combined use of the security forces on air, waters and on the ground for effective control of crimes in the state.

Swipe: Zombies To Help You Get Fit And Twitter Banter [VIDEO]