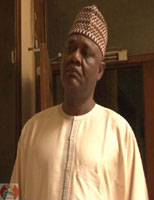 The Economic and Financial Crimes Commission, EFCC, on Wednesday, June 10, 2015 re-arraigned Dr. Sani Shuaibu Teidi, former director of Pension Accounts, Office of the Head of Civil Service of the Federation before Justice Gabriel Kolawole of the Federal High Court, Abuja .

Teidi’s re-arraignment by the anti-graft agency followed his application to the Chief Judge through his counsel, Sunday I. Ameh, SAN, seeking the transfer of the case to another court over an alleged bias of the trial judge, Justice Ademola Adeniyi.

On Wednesday, while the charge was being read for the accused persons to take their pleas, Teidi’s counsel, A. S Akpala raised objection to counts 5-10 and 17-18 as amended by EFCC.

According to Akpala, “there is no charge against Dr. Shuaibu Teidi, because the charge listed Abdul Muhammad and three other companies who are currently facing trial in Court 5 of the Federal High Court, Abuja”. 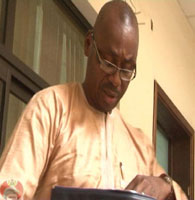 “Therefore, the charge is a module and we humbly ask this honourable court to strike out the charges from 5-10, 17 and 18 respectively”, Akpala pleaded.

However, counsel to EFCC, Emmanuel Egwuagu urged the court to discountenance Akpala’s submission saying, “There are no ambiguities on the counts 5-10 and 17-18 as observed by the defence”.

Citing Section 1 (1) of the Advance Fee Fraud and Other Fraud Related Offences Act which deals with obtaining money by false pretence , and Section 220 and 221 of the same Act,  Egwuagu said, “objection is not allowed when the charges are being read to the accused person to take his plea”.

Justice Kolawole, after listening to the arguments of both counsel, and having taken a cursory look at authorities cited by the prosecuting counsel, ruled that the charge should be read to the accused persons for them to take their plea.

One of the counts reads:

The accused persons pleaded not guilty to the charge when it was read to them.

Justice Kolawole adjourned the case to October 8, 2015 for trial to commence and ordered the accused persons to continue with the bail terms earlier granted them by the trial court.

It will be recalled that, Teidi was first arraigned on March 24, 2011 alongside nine others and 30 companies on a 134-count charge for allegedly defrauding the Pensions Account, Office of the Head of Service of the Federation, of billions of naira.

Mr. HarrySong Reveals That He Is An inc*st Child (Child From...

Prospect For New African University Ranking: A Glimpse For You

I Regret Not Having A Ph.D By Now – Actor Chinedu...

Offset Buys A Brand New Lamborghini For Cardi B