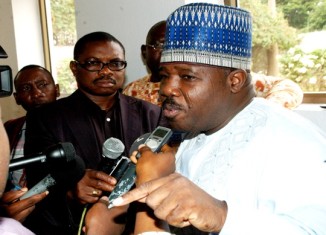 A former Governor of Borno State, Senator Ali Modu Sheriff, was on Wednesday a guest of the Economic and Financial Crimes Commission, EFCC, where he was interrogated on some dealings while he held sway as governor between 2003 and 2011.

The former governor was alleged to have mismanaged part of the N300 billion his administration received from the federation account during his tenure.

Recall that following his failure to honour EFCC’s invitation, the anti-graft agency had on Monday, May 25, 2015, threatened that it will declare him wanted over the allegations against him.

Sheriff is the second ex-governor to have voluntarily turned himself in at the Wuse II, Abuja headquarters of the anti-graft agency in less than a week.

Ex-Governor Murtala Nyako, who recently returned to the country almost a year after he fled to an unknown destination abroad, also turned himself in to the EFCC office in Abuja, where he was grilled on how he managed the finances of Adamawa State before he was impeached by the State House of Assembly.

It was learnt that Sheriff, who arrived EFFC’s premises at about 6pm, was being interrogated over his roles in alleged cases of misappropriation, embezzlement of funds and abuse of office while he was governor of the Northeastern state.

Confirming the development, the Head, Media & Publicity of EFCC, Wilson Uwujaren, said the former governor was at the office of the anti-graft agency Wednesday.

“I can confirm that he (Modu Sherif) is at the commission”, he said.

As at the time of publishing this report, the ex-governor is still being detained at the EFCC headquarters in Abuja.

People Mistake My Self Confidence For Arrogance – Ebuka Obi-Uchendu