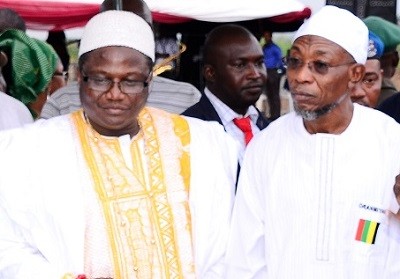 The embattled Governor of Osun State, Ogbeni Rauf Aregbesola got massive support from unexpected quarters yesterday when the Ataoja of Osogbo, Oba Jimoh Olanipekun, said he does not deserve all the flaks he has been receiving of late over the financial crisis bedeviling the state.

According to the monarch, Gov. Aregbesola should rather be commended for the way he has been running the affairs of the state since he assumed office.

Speaking to journalists at his palace in Osogbo on Tuesday, Oba Olanipekun said the recent attacks directed against the governor were borne out of ignorance of many, saying Aregbesola did well in his first four years in office and ensured that workers were paid before the end of every month.

The Ataoja noted that the financial crisis which hit the nation also had an effect on the resources of Osun State and this, he said, was what made it difficult for the governor to continue to pay the workers regularly and as at when due.

He said: “Since the governor assumed office for the (sic) second term, some unscrupulous persons have been criticising him wrongfully and we have to enlighten the public who may not be aware of what he has done that demands praise.

“We should let him continue in office so that at the end of his second term, Osun State will record more successes than what was recorded in his first term.

“Look at the previous administrations in the state, I believe Nigerians know that this administration has performed more than his predecessors. He has uplifted the face of the city, Osogbo which is the capital”.
The monarch also commended workers and labour leaders in the state for their patience and endurance but pleaded with all categories of workers to resume work to move the state forward.

Listing some of the achievements of the governor, Oba Olanipekun said the road network in the state and especially in Osogbo, the state capital, was good while standard schools were built to replace dilapidated ones.

I Don’t Feel Bad About The Negative Comments On My Sexuality...

Barcelona Were Not Smart Enough – Mascherano