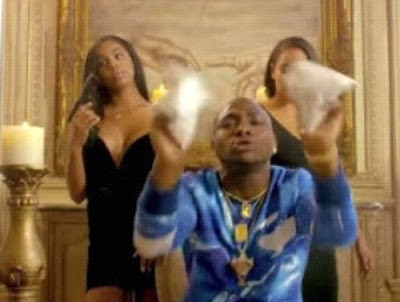 Davido’s manager has disclosed to Saturday Beats that the singer has not been invited by the officials of NDLEA and neither has any police station contacted them. Kamal Ajiboye said a lot of people misinterpreted the video and it was because they did not watch it to the end. He urged people to watch it to the end then they would understand what the singer promoted was an African culture, he said. Read his exact statement on the alleged drug issue after the cut.

“The NDLEA has not got in touch with us. We heard about the news on the pages of newspapers. They have neither called nor invited us over. People just pictured the video in a negative way. When we wrote the script for the video, it was not to portray Davido as a drug trafficker. If they watch the video till the end, they would notice that we were selling African lifestyle through our food. That was our idea of the video. If you watch it to the end, you would see him eating pounded yam and vegetable soup. When we learnt that people thought Davido was using the video to encourage drug usage, we were very shocked. We hope that when people watch it to the end, they would get the message. Davido is baffled that he is under investigation by the NDLEA but what would he do when they have not made any contact with us? We would keep doing our business as usual. Not even the police have placed a call to us, not to talk of the NDLEA before people would begin to say that we are using money to influence the situation. They have to take a step first. As of Wednesday when Davido was travelling to Durban, we were hoping that the NDLEA would accost us at the airport so that we could sort this issue out, but there was nobody there,” he said.

Govt Committed To Adequate Protection Of Lives And Property Of Riverine...