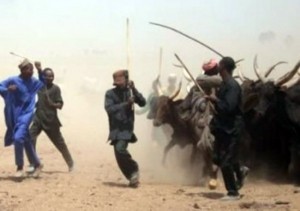 The latest attack is coming just five days after Governor Darius Ishaku read a riot act to traditional rulers in the state during a security meeting to ensure overall peace in every part of the state saying whoever is found wanting would face the full wrath of the law.

The Fulani herdsmen reportedly launched the attack to avenge the death of a Fulani who was killed in the area after being robbed of his motorcycle.

According to an eyewitness, Dooior Torkuka, who spoke to journalists, the Fulani herdsmen stormed the town in the night and started attacking Tivs on the suspicion that they might be responsible for the killing of the slain Fulani man in the bush.

However, Torkuka absolved the Tiv people in the area of any complicity in the killing of the slain Fulani man, saying the persistent killing of Tivs has forced majority of them out of the area while those remaining abstained from going into the bush and restricted themselves to the town to avoid attacks.

“Since the crisis forced the Tiv people out of the area, no single Tiv man is in the bush now. Their security is not guaranteed and the few who have returned are staying in the town. How can the killing of a Fulani man in that interior bush be attributed to the Tivs, who are not even allowed to go or stay in the bush at the moment?” he queried.

Police Public Relations Officer (PPRO), DSP Joseph Kwaji confirmed the incident. According to him, armed Fulani men attacked a Tiv man on his farm around Dan-Anacha and killed him and were mobilising to attack the town when police got information and drafted mobile police men to the area. Normalcy had since been restored, he said.

Can Tottenham Hotspur Win A Trophy?