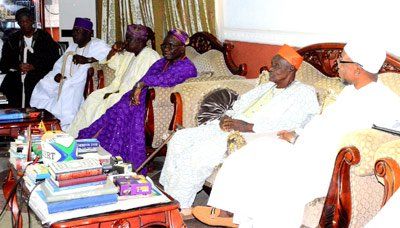 The RTC, which had since dismissed the rumour, was led to the meeting that lasted about 10 minutes by Lowa of Ife, Oba Joseph Ijaodola, with the secretary of the body, Chief Adetoye Odewole, also in attendance, among others.

At the first meeting held in the presence of newsmen, Oba Ijaodola, who is next in rank to Oba Sijuade, reiterated their previous position that the Ooni was alive and in good health.

According to him, the council visited Aregbesola to update him on Oba Sijuade’s state of health. He lamented that the Ooni was often a target of negative publicity with the press declaring him dead several times in the past.

“We were all shocked when we heard the rumour. If at all such an incident had occurred, the traditional council would be the first to know and break the news to the entire public. Sixteen of us are his chiefs and when he was travelling out, he did not look like he was going to die and should that have happened to him, we would have been informed even before anyone would hear about it. We pray that Ooni Sijuade will live long in good health,” he said.

In his response, Aregbesola commended members of the traditional council for holding forth while Ooni Sijuade was away and prayed for sound health and long life for Oba Sijuade.

The governor and the chiefs later proceeded to another room within the Governor’s Lodge to hold another meeting, details of which was not disclosed to newsmen by the chiefs.

Also present at the meeting were top officials of the state government that are indigenes of Ile-Ife, led by Chairman, Senate Committee on Rules and Business, Senator Babajide Omoworare. Others were former member of Osun State House of Assembly, Hon. Adetilewa Sijuade, former Commissioner for Culture, Tourism and Home Affairs, Mr. Sikiru Ayedun and Special Adviser to the governor on Youth and Sports, Mr. Biyi Odunlade.

Victoria Kimani Is Not Pleased With Kenyan Show Organisers