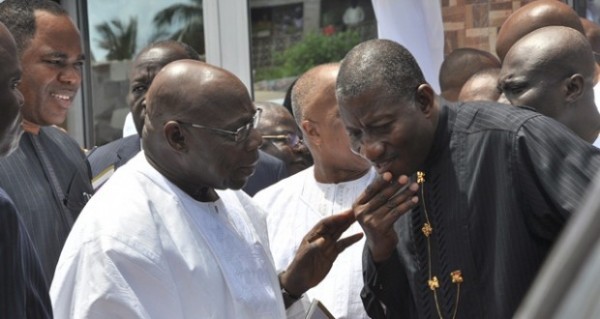 The umbrella body of Ijaw youths, the Ijaw Youth Council (IYC) Worldwide, has taken former President Olusegun Obasanjo to the cleaners over alleged uncomplimentary remarks he made against the immediate past President, Dr. Goodluck Jonathan.
Obasanjo was reported to have while delivering a convocation lecture at Benson Idahosa University, Benin, Edo State, said that the perceived failure of Jonathan in office would haunt the people of South-South zone for a long time.

But the IYC took exception to the comment, saying that the statement was reckless, baseless and a deliberate effort by Obasanjo to dent Jonathan’s towering image in the international community.

The group in a statement on Sunday by its spokesman, Mr. Eric Omare on Sunday, said Obasanjo’s comment was uncharitable and a calculated attempt to tarnish the reputation of one of their revered illustrious sons, whose records of performance were unparalleled in Nigeria’s political history.

The group said, “The IYC considers the statement as reckless, baseless and a deliberate effort by Obasanjo to dent former President Jonathan’s towering image in the international community.

“As usual, Obasanjo does not want anybody in Nigeria to be greater than he.

“The IYC makes bold to state that former President Jonathan’s five years in office were far better than Obasanjo’s eight years in office. If Obasanjo has forgotten, we wish to remind him that because of his reckless impunity in rigging elections, late President Umaru Yar’Adua on assumption of office had zero regard in the international community.

“However, President Jonathan has redeemed this badly battered image by reforming the electoral system as elections in Nigeria today are substantially free, fair and credible with the consequent goodwill it has generated for Nigeria in the international community.

READ  No One Should Not Be Forced Into Marriage With God’s Name - Rev. Samuel Adedayo

“President Muhammadu Buhari would not have been receiving the highest respect before President Barrack Obama in the United States now if not for former President Jonathan’s efforts in reforming the electoral system in Nigeria”.

The IYC stated that if there was any region that ought to be haunted by the performance of any ex-Nigerian President, it is the South West region as former President Obasanjo’s performance in office was abysmal.

However, it said the South-West was completely exonerated from any blame as they totally rejected Obasanjo in 1999 because they knew very well that nothing good could come out of him.

I Will Rehabilitate IDPs – Buhari